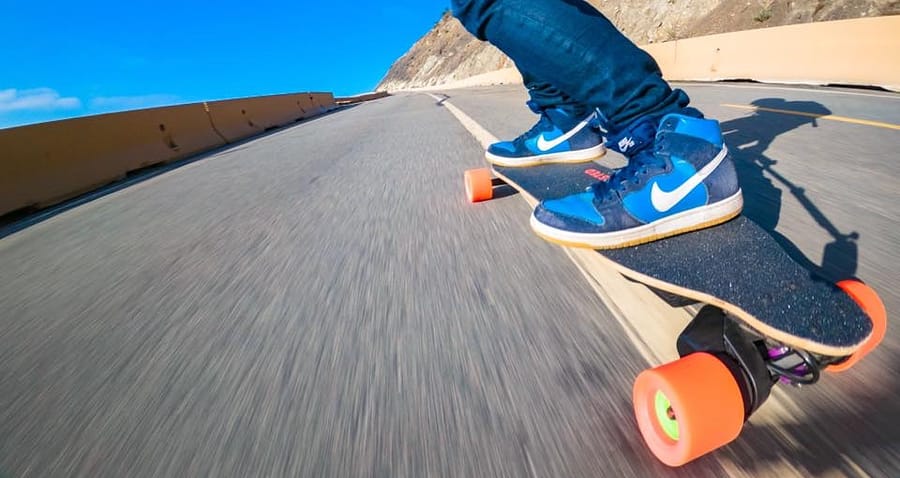 What Is The Fastest Electric Skateboard?

In the remainder of this article, we will touch on 7 of the fastest electric skateboards on the market and ultimately see which of them earns the speed crown. Keep in mind, the top speed used to categorize these skateboards are taken from the manufacturer's marketing specifications. Certain variables like modifications, rider weight, incline, battery percentage, and terrain type can affect speed performance.

While top speed is a significant factor for many prospective buyers, you should also consider attributes like price, deck flexibility, acceleration, hill climbing potential regenerative braking, battery life/range. Electric skateboards are a lot of fun and a great way to travel short distances. Be sure to always wear a proper helmet for safety as injuries can be severe without one, especially at these high speeds.

Meepo is a Chinese manufacturer of electric skateboards that has quickly been growing market share after launching in 2017. The company was founded after the CEO made his own boards and posted them on YouTube in which others rapidly caught on and requested he makes more of them to sell.

Meepo's AWD Pro is one of their latest boards and also falls into the highest performance category of their product lines. Designed for a serious rider, the AWD Pro sets some impressive performance benchmarks with hub motors, a range of 15 miles and a top speed of 34 mph (55 kph). This makes the Meepo AWD Pro the fastest electric skateboard that is openly available for sale to the public.

Give this company is so new and growing fast, they have priced their electric skateboards competitively within the marketplace. This makes the pricing very reasonable at just under $900 for their AWD Pro high-end electric skateboard. Keep in mind, there is always a more significant risk buying from a newer foreign player in the marketplace, and the warranty is only 6 months (vs. 12 months for most competitors).

The second Meepo electric skateboard model to make this list, falling five mph shorter in top speed than its higher-end AWD Pro sibling. The NLS Pro is more of their mid-range product that competes directly with Boosted Boards in regards to its overall style, specifications, and feel of the electric skateboard.

When comparing the specifications against Boosted's offerings, the Meepo NLS Pro does offer a lot of value on the dollar. You've got a battery life and range of up to 29 miles, a fast top speed of 29 mph (46 kph), and a full bamboo deck coupled with shock-absorbing 100mm wheels.

In terms of performance, the acceleration is excellent, taking only 5 seconds to reach 19 mph. The top speed on a 15% grade is still 12 mph. This isn't that fast, but with the variable of the incline, it is still very respectable.

Priced at under $700, the NPS Pro from Meepo is one to consider if you are willing to invest in a lesser-known brand yet reap the benefits of the simple design mixed with the impressive specs that make the competing electric skateboard brands envious.

Evolve has been in the electric skateboard industry since the beginning and has pioneered the mainstream concept of e-skateboards. This company doesn't seek to be the cheapest board on the market. Instead, they strive to offer a very refined and high-quality product, which is why the price tag falls just under $2,000.

This is very noticeable as their models offer some of the highest build quality, performance, and overall riding experience that you can get from an electric skateboard. The Carbon GTR Street clocks in at a 26 mph top speed. This is a significant gap from the fastest option but still quick enough for most riders.

A lot of competing boards utilize a composite, bamboo, or another type of wood for the deck. This particular model is handmade from 100% carbon fiber, which hides the electronics and makes for a super sleek and elegant design. Other specs include an impressive 31-mile range per charge and climbing up to a 30% grade.

Another new company to the electric skateboard scene is Skatebolt, which was launched back in 2016. Unlike Evolve, Skatebolt's purpose is to design safe, convenient, and affordable products that are less on the premium side but easier to get into consumer's hands without breaking the bank. Their Tornado model comes in at just under $500 at the time this article was written.

The design is similar to the Meepo AWD Pro or Inboard M1 in the sense that it offers a firm deck made of 8 layers of maple wood. There are also built-in tail lights for safety purposes, which makes night riding safer and more convenient.

With a top speed of 25 mph, this is not the fastest electric board on the market, although it is plenty quick for experienced riders who want to get around town, campus, or their neighborhood. Other specifications include dual motors capable of a 25% incline and a maximum range of 18.6 miles.

Boosted is the most popular electric skateboard company in 2019. Boosted Boards have been a top trend for celebrities and social media influencers such as Casey Neistat or MKBHD. Designed with a product focus on design, build, and performance, Boosted is the most ‘Apple” like manufacturer in the industry.

Over the years, there have been many iterations of Boosted Boards. The Stealth is their latest and greatest electric skateboard, which also happens to be the fastest model they have ever produced, reaching 24 miles per hour with a decent range of 14 miles. Priced at just under $1.6K, this electric skateboard isn't cheap, although sometimes you can score a good deal on a slightly used model.

The Stealth is belt-driven, thus offering some of the fastest acceleration of an electric skateboard coupled with a flexible composite deck, which helps relieve bumps and uneven terrain. Unlike most Boosted Boards, the Stealth offers metal belts, which means you'll never be stuck with a torn belt mid-ride (we know from experience on our V2 how much of a pain this situation can be).

The Blink QU4TRO from Acton is a lesser-known electric skateboard model, but an interesting one nonetheless. Comparably, the specifications were decent at launch as it was one of the first 4WD electronic boards. However, competitors like the Meepo AWD Pro now surpass it in most benchmarks.

Priced at just under $1,500, the QU4TRO is not a cheap skateboard, but it does pack a decent punch with a 4WD hub system, 22-mile range, regenerative braking, 30% incline climbing, LED board lighting and a top speed of 23 mph.

At 23 mph, this is near the bottom of the list of the fastest boards. However, it still offers a lot of bang for your buck. That is if you are okay with buying a lesser-known brand that may suffer from potential warranty repair issues down the line.

Boosted Board Plus – 22 mph

The lower-end electric longboard from Boosted is their Plus model, which comes in just under $1,400. It isn't as fast as its older Stealth sibling but is capable of a respectable 22 miles per hour. Unlike the Stealth, while both belt-driven, the Plus utilizes rubber belts that are prone to potential wear and tear, thus likely needing to be replaced after a decent amount of riding.

With a range of 14 miles, the Plus offers plenty of bang for your buck, also taking advantage of Boosted's latest generation super flex composite deck. This model utilizes 85mm orange wheels, which look and feel great yet do get pretty dirty over time.

As with all Boosted products, you get a 1-year warranty of which the company is well-known for providing superior service to customers of their electric skateboards. You also have access to their excellent companion app on iOS and Android for updating firmware, tracking mileage, and adjusting your various board settings.

When the M1 from Inboard first launched, it got a lot of attention from the e-skate community, and this was amplified when the company showed off this model on ABC's Shark Tank reality TV show. Ultimately, Lori Greiner and Kevin O'Leary invested a 750,000 loan at 9% interest for 4% in the company.

Since then, the company has gone a bit stagnant. Inboard has not released any new electric skateboards as their rival competitors like Boosted are pushing out improved models each year. With that being said, the M1 is still a decent choice for many prospective buyers, especially at the discounted price-point from $999 to just $599.

From a performance perspective, this electric skateboard model offers a firm deck that feels a bit more stable in some scenarios but struggles on bumps or uneven terrain. Topping out at a maximum speed of 22 mph, the M1 is still plenty fast, although it falls behind in range with just 7 miles per charge (battery is swappable).

A unique electric skateboard alternative that still falls within the same target market is the OneWheel XR, which is designed for on and off-road use. Instead of having the traditional four wheels attached to a deck via two trucks, the OneWheel XR offers a single massive rubberized wheel in the center of a two-sided deck.

Unlike the rest of the electric skateboard mentioned within this guide, the OneWheel XR doesn't use a handheld remote. Instead, this device relies on the weight distribution of the rider, much like a Segway. This allows you to balance standing still and go forward by leaning in that direction while braking or moving backward in the opposite direction.

In terms of top speed, the OneWheel XR can't compete with the fastest traditional electric skateboards on this list, mainly due to the different form-factor. However, it still puts up a respectable 19 mph top speed with a range of up to 18 miles, thus making for a fun ride both on and off-road. It's not cheap at nearly $1,800 although you can often score a used Onewheel for much cheaper.

This concludes our guide on which is the fastest performing electric skateboards currently on the market. Keep in mind, the models listed here will be updated frequently as newer, faster e-skateboards are released in the future. If you are in the market for a board or just want to keep up to date with the top speeds on the market, bookmark this guide for future reference.