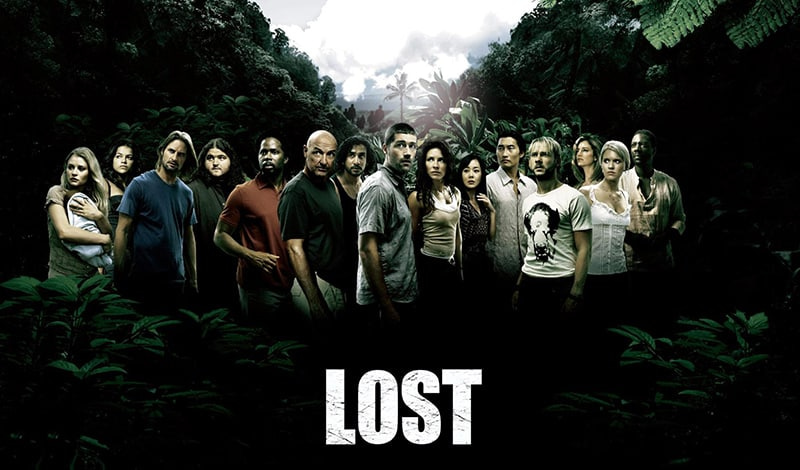 After spending dozens of hours researching, we have found the best legal ways to watch Lost online and determined Hulu is the best solution for watching the TV series in its entirety.

If you are outside of the United States and Hulu isn't available in your country, then you can use a service like NordVPN to spoof your location to the United States (a legal loophole) and still access all of the streaming potential of Lost episodes.

If you don't have a Hulu subscription or you don't live in the US, the best alternate option is to purchase the digital seasons or episodes of Lost from Amazon starting at $1.99 per episode or $19.99 per season.

Quick Navigation: Jump To A SectionWhich Streaming Services Offer Lost? (US)How To Watch Lost Online (Past Seasons 1-6)Why Is Lost Not Available On Netflix?Why You Shouldn't Illegally Watch Lost Episodes

ABC released a mammoth of a TV series with Lost which initially aired on September 22nd, 2004. The show was comprised of six seasons that resulted in 121 total episodes. Since then, the show has gone on to reach legendary status with many critics raving that it is among the greatest televisions series of all time.

Lost had been nominated for several prestigious awards including Golden Globes, Primetime Emmys, Screen Actors Guilds and even won Entertainment Weekly's “Entertainer of the Year” award in 2005. Michael Emerson won a Primetime Emmy Award for his portrayal of the villain, Benjamin Linus, in ABC's Lost.

If stumbled upon this article, you probably missed out on all the Lost hype while the TV series aired and want to enjoy the stellar television show from the beginning. Don't worry, we also found ourselves in the exact same situation only to be mesmerized by the stellar storyline years after the final season of Lost had ended.

Fortunately, there are several different ways you can stream Lost online, and some of them won't cost you any money if you already subscribe to various video streaming services. In the remainder of this article, we will go discuss these methods of Lost streaming and hope we help you find a way that works for your needs or budget.

Which Streaming Services Offer Lost? (US)

How To Watch Lost Online (Past Seasons 1-6) 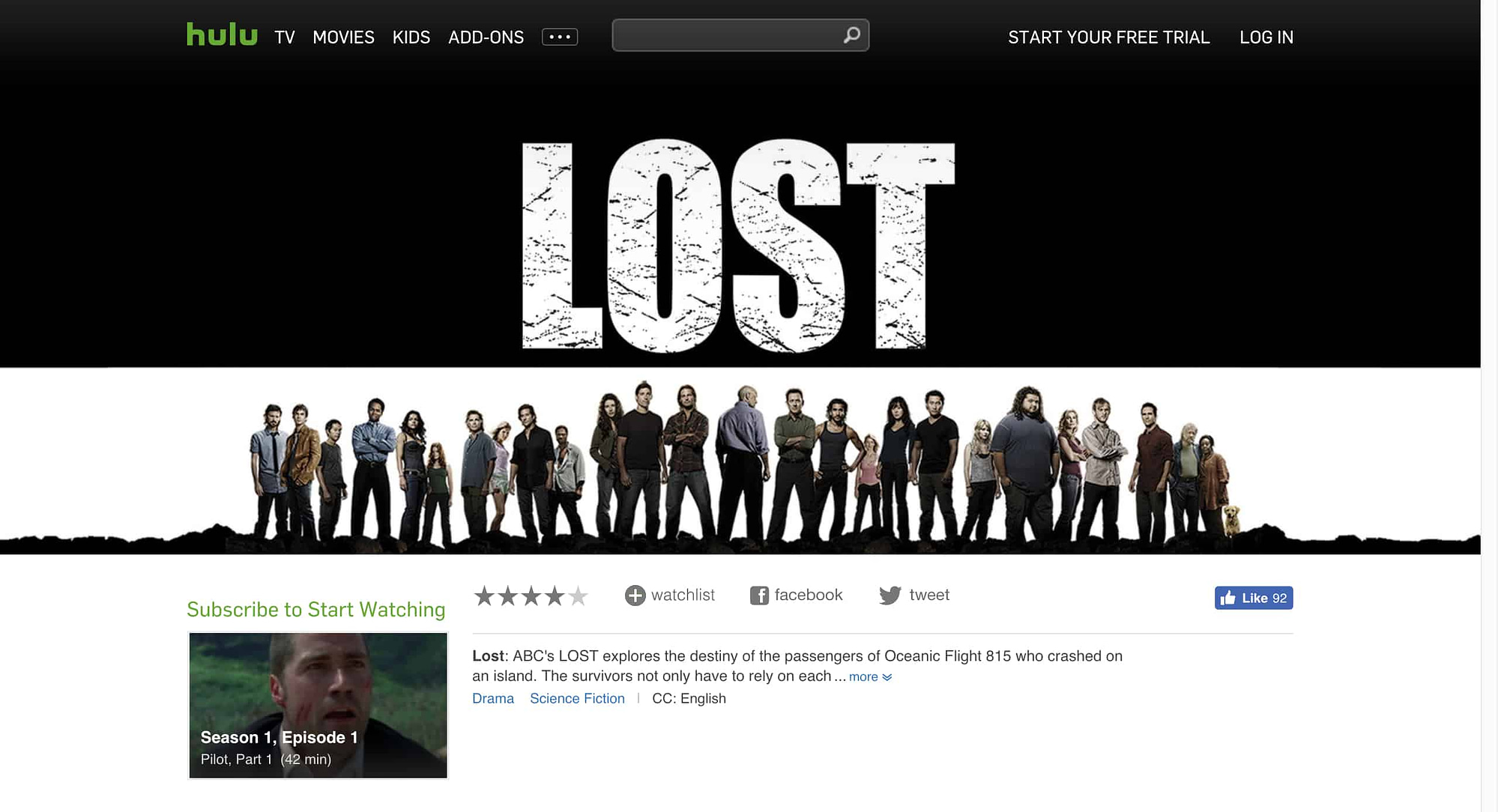 There is also a new Hulu with Live TV plan that offers access to 50+ live television channels plus access to their entire on-demand streaming library (of which Lost is included) and this plan starts at just $39.99 per month.

Better yet, Hulu offers a free 30-day trial on both of their streaming plans (valid credit card required) although you won't pay anything if you cancel before the billing period starts.

While Hulu is a quick and easy solution for starting or catching up on Lost, the service is currently only offered to customers in the United States. However, a legal loophole to stream Lost online through Hulu outside of the US is to utilize a service like NordVPN.

This method allows you to utilize a U.S. IP which will trick the service into thinking you are located within the States and allow access to streaming Lost content (an active Hulu subscription is still required). 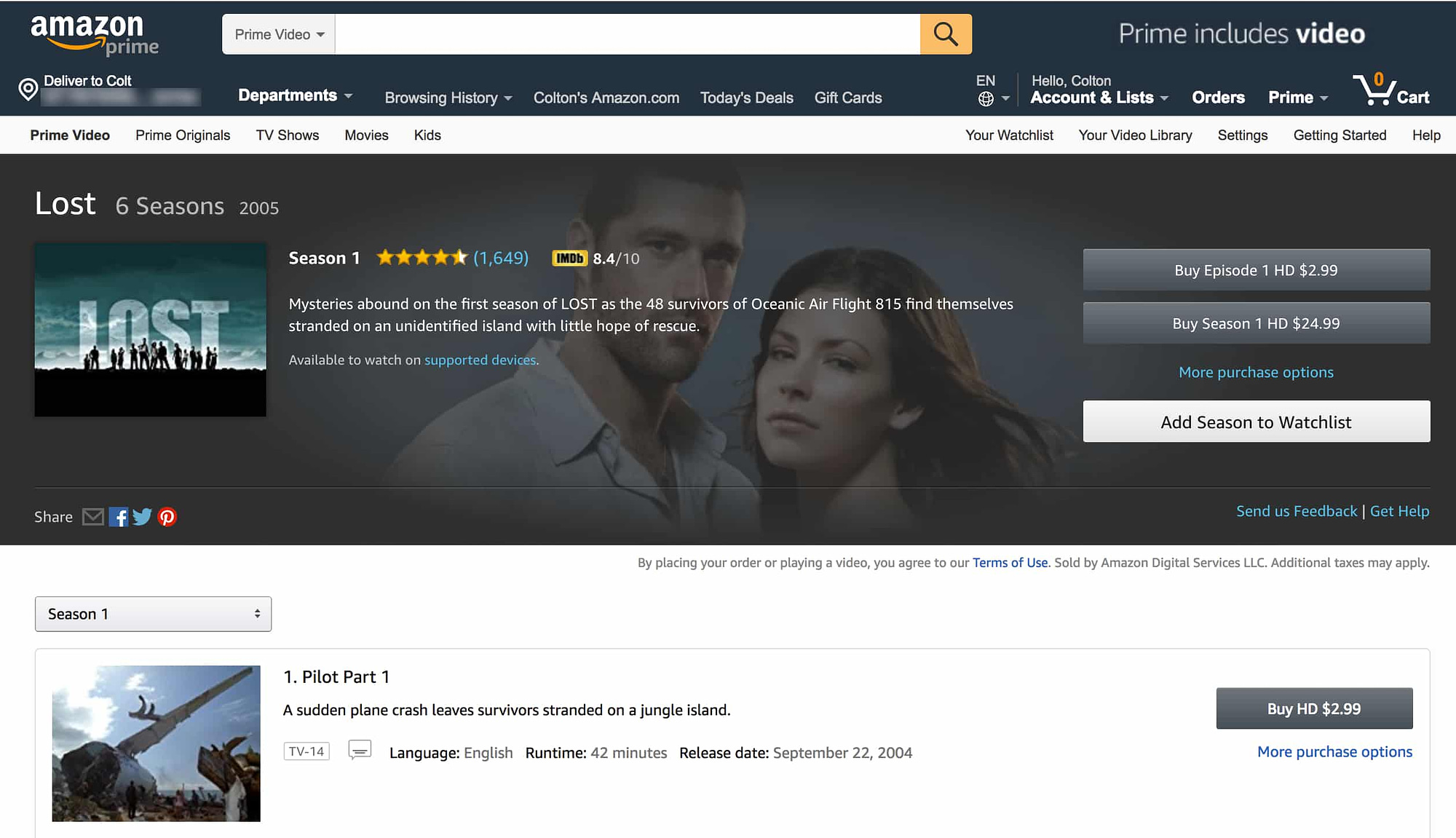 Amazon's Prime Video service does not offer free streaming of Lost seasons (like Suits) however, it does sell digital access to the TV series through their standard Amazon Instant Video service.

The pricing of this digital access will depend on whether you want to purchase individual episodes or the bundled season rate. All six seasons are available to watch through the platform starting at $1.99 per episode for standard definition ($2.99 for high definition) or as low as $19.99 a season for SD ($24.99 for HD).

You can buy digital access to Lost through Amazon Instant Video regardless of whether you are an active Prime subscriber and Amazon's premium membership doesn't hold any weight for this method, in this circumstance.

We love Amazon Instant Video's convenience as many smart devices and TV models offer native streaming of video content from this platform without any complications or hurdles to jump through for watching Lost episodes.

For some of you, the bingeing of new video content is preferred to be done through an Apple device whether it be an iPhone, iPad, Mac or Apple TV. In this case, you might want to skip Amazon Instant Video and utilize a more Mac-centric solution like Apple's own iTunes which offers the sale of Lost episodes and seasons for digital viewing.

Purchasing Lost episodes and seasons directly from iTunes matches Amazon Instant Video's pricing exactly with SD content as low as $1.99 per episode or as low as $19.99 a season. High definition content will cost you an extra dollar per episode or $5 more for each season in HD.

We still prefer Amazon Instant Video over iTunes as there is much wider support for native integration of this platform outside of the Apple eco-system, but if you're a diehard Apple fan, then you may be better off going with iTunes. 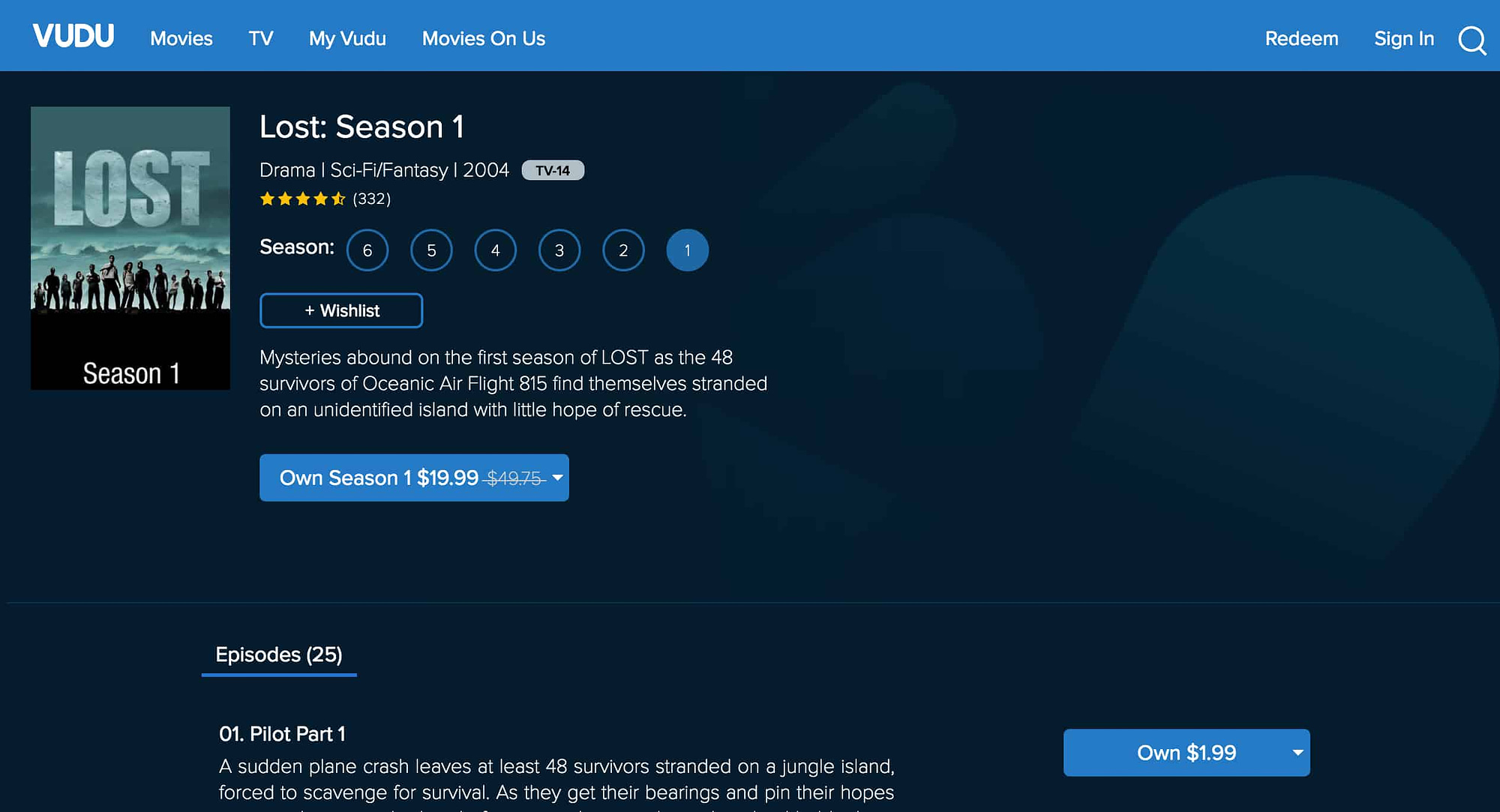 Vudu is a lesser-known online video distribution platform, but still a reputable option. In this case, you can purchase the full 1-6 seasons of Lost or individual episodes for immediate viewing.

Not so surprisingly, Vudu has followed its Amazon and iTunes competition with pricing starting at $1.99 per episode or $2.99 for HD (they show their SD pricing by default). Purchase seasons for as low as $19.99 for SD or bumped up $5 for access to it in ‘HDX', which is just fancy marketing lingo for high definition.

While not as widely supported as Amazon Instant Video, there are native app for Vudu on many Smart TV operating systems as well as downloadable apps for streaming devices like a Roku as well as the PlayStation 4 and Xbox One game consoles.

Why Is Lost Not Available On Netflix?

When we first wrote up this article back in 2014, Netflix was offering free streaming of all six seasons of the Lost TV show. However, as time has gone on, licensing agreements for streaming services such as Netflix change.

Netflix is no longer offering any form of digital access to Lost through their platform and it seems Hulu is the only affordable, unlimited streaming service to hold the TV show within their content library.

While this is unfortunate for current subscribers that were hoping to watch Lost through Netflix, that doesn't mean that a future agreement can't happen and the television show won't re-enter the streaming library in the future.

However, if you are impatient and want to stream what we think is one of the best TV series of all time then you'll have to go with Hulu, but fortunately, they offer a free 30-day trial for any first-time users. 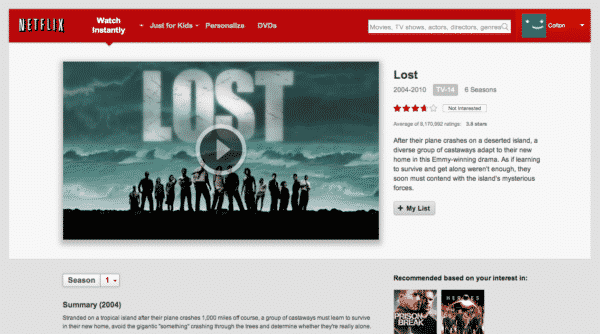 An old screenshot of Lost being available to stream on Netflix from back in 2014.

Here are the main three reasons why we do not recommend pirating TV series like Lost:

Reason #1: You Will Be Breaking The Law & Have The Potential Of Prosecution

While such an offense like this is unlikely to end up in any concrete legal threats to you due to the high number of people unlawfully downloading licensed content on the web every day, that doesn't make it justifiable.

The chances of getting caught are indeed slim, but it has happened in the past. As the industry continues its shift to digital, we won't be surprised to see more cases coming forth in the future.

Over the past decade there have been less than 10,000 cases of prosecution from everyday people committing piracy, but if you do get caught then you can expect:

Here are a few knowledgeable links to read more on related to the legal risks of online piracy:

Reason #2: Many Piracy Methods Aren't Safe To Utilize & May Harm Your Computer

There are many shady websites or torrents out there offering a free way to watch Lost online and while this likely seems tempting, you should be cautious. Beyond the obvious legal risk, you can easily find yourself in deep trouble through hidden manipulation by these services.

According to a recent study by the Telegraph, 90% of all illegal film and TV sites in the UK contained malware and other unwanted programs designed to defraud its users. This includes all sorts of illicit schemes like phishing scams, viruses, malware, spyware and identity theft.

By opening up a can of worms like this, you could face the costs of repairing your computer or worse the aftermath of dealing with a stolen identity, financial theft (if they manage to phish your banking information) or unwarranted access to potential sensitive information or documents storage on your computer by an unknown party.

Reason #3: It Can Affect The Future Production Of Quality Television Content

In the heart of the piracy debate is the moral and ethical code by which we should abide by as consumers. If you owned a business or provided a service that you've mastered wouldn't you want to be able to be appropriately compensated for it?

Kind of the like the same way an A-List musician like Taylor Swift wouldn't put on a concert (unless a good reason such as charity) without making the proceeds from ticket sales, we can't expect the high-cost production of a show like this to be free entertainment for us.

By choosing to defraud the movie or TV industry through piracy, you are taking away revenue from the content creators themselves. This includes the money needed to pay for the livelihood of actors, writers and production staff who all worked extremely hard during the making of a stellar series like Lost.

The lack of the ability to accurately monitor the success of a TV show like Lost through metrics like online viewership or digital sales (you'll not be included in either through piracy) can also cause issues for a network like ABC. Too much piracy will result in less of an effort to create follow-up seasons to a series like this or any potential spin-off series based on a similar concept or specific character from the original.

By supporting the entertainment industry in a digital realm, we will promote the future creation of excellent content and will be able to have more opportunities to dive into a great television like Lost to escape for a few hours from the worries of everyday life.

At this point, we have shared all our knowledge on how you can enjoy all the twists and turns of Jack, Kate, Sawyer, Sayid, Huge, John Locke and the rest of the survivors of Oceanic Airlines Flight 815. We hope this helped you discover the best way to watch Lost online and that you found the ideal method to meet your needs and budget.