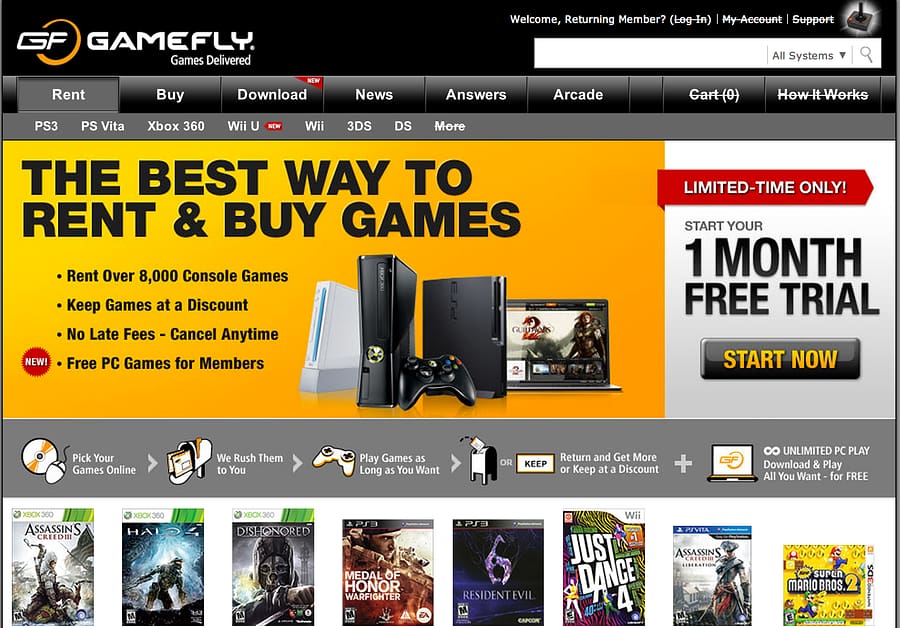 GameFly boasts an affordable way to play all your favorite games without spending a ton of money in the process.

GameFly has been around since 2002 and serves as the Netflix of video game rentals. They offer multiple plans ranging from $15.95 for one game out at a time and ending at $36.95 for four games out at a time. Besides service rental plans they also offer the ability to purchase games directly through GameFly often at reduced prices considering they have a large assortment of previously rented and therefore used games. They have been in business since 2002, but have recently came to the public attention for running commercials with celebrity endorsements such as Blake Griffin. They also have gained popularity after the large number of brick and mortar video game rental chains such as Blockbuster and Hollywood Video closed their doors leaving GameFly one of the few alternatives for renting video games.

The process is simple and similar to Netflix. You use an online interface to select titles you want to play and place them in your “GameQ”. As these titles become available they will be shipped straight to your door for your enjoyment. When you have completed or are sick of playing the same game you place it in the prepaid postage envelope that it shipped with and mail it back to the GameFly warehouse thus initiating the next title in your GameQ to begin shipment to you.

On paper the features included with GameFly look amazing. With the option of 1-4 games at a time, “unlimited” PC play, no late fees, and a free one month trial this service seems unbelievably awesome.  Another great thing about GameFly is that they don't just support the major two consoles (Xbox & PS3), but they also feature rent-able games for the following systems:

Judging off the notable features alone, I could easily see people signing up for this service to replace spending the conventional $60 on a game that you might only play for less than a month. The real question is now that we know GameFly can talk the talk….can it walk the walk?

Now it's time for the reality check that all potential GameFly users need to face before signing up for this service. Unfortunately, as amazing as the features are presented to you, the overall execution of the service is disappointing to say the least. I'll make it as clear cut as possible the issues I faced during my 1 month trial.

One of the most disappointing things about GameFly is all the latest and “hot” games aren't actually able to be rented due to such high demand. Games that are over a year or two old seem to all have “high” availability scores, but who wants to play old games? In most cases, I want to play the latest and greatest. So this is a heads up to all of you who want to use this service to rent the newest Halo, Call of Duty, or Assassins Creed. In most cases you will not be able to receive this game until long after you've placed it into your GameQ.

When I signed up for the service I was so excited to add my first title to my GameQ and receive my first game. Since I signed up on a Friday morning, I immediately added a bunch of the latest games I wanted to try out. This included Assassins Creed III and Hitman: Absolution both of which I've heard great things about. To my surprise they were both “low” availability so I had to resort to adding a bunch of older titles that I would be able to receive during my 30 day trial. I decided my first game would be the Godfather II ( it had “high” availability) since I played the original and thought it was an enjoyable single player experience. I placed it at the top of my GameQ on Friday the 14th. It did not start the shipping process til Monday the 17th and I finally received the game on Saturday the 22nd.  In the end the total time between placing the title in my GameQ and receiving the actual game in the mail: 9 days! This means if you were to get a 1 game a month you'd be lucky to swap out 3 games a month for the $15.95 price tag.

I had consulted support about this issue on Thursday the 20th and they gave me the generic response below:

Thank you for reaching out to us, Colton. We are sorry to hear that Godfather 2 has not yet arrived to you. As you may know, our games are shipped via the US Postal Service which typically takes 2-4 business days. Please note, however, that we can report a shipping problem with a game once it has been 7 days.

If you don’t receive your game by 12/24/2012 then simply reply to this e-mail or save some time and go online to report a shipping problem and we will take care of it for you! Report a Shipping Problem is located on My GameQ, once there select the option “I never received the game.”

If we can be of further assistance, don’t hesitate to reach out. We're here to help!

This is one of the biggest complaints I have with the GameFly service. First off, they advertise obsessively that you get free “unlimited PC play” with every service plan. This makes you think to yourself that sounds awesome, I get to play all the latest titles on my PC without having to wait for them to ship to me? Count me in!

Boy was I wrong. The games found within the “unlimited PC play” are pretty laughable. With the most popular games being the original Splinter Cell, Hitman: Blood Money, the original Fallout, the original Ghost Recon, Bioshock, Just Cause, and the original FarCry you can likely see how great of a selection they have. These are great games don't get me wrong, but they were great games 5+ years ago and frankly if I'm paying for a service like this I don't want to play unlimited amounts of outdated games. They don't state anywhere on their advertisements how poor their selection is for this feature so be sure to take note if you plan on buying a subscription just to take advantage of this “unlimited PC play”. 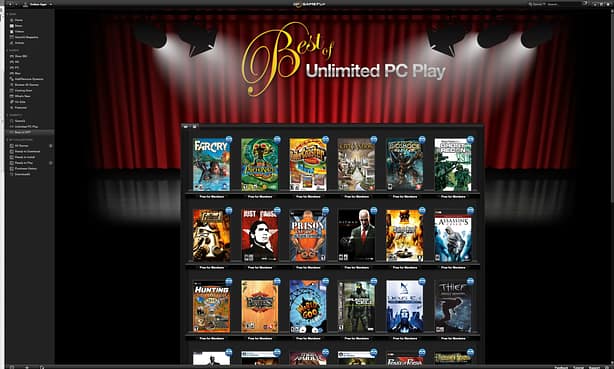 Not only did the selection of titles in the PC disappoint me, but it's overall function was even more disappointing. Out of all the games listed in the client for free play, there was a single game I wanted to play (since I've played through virtually all of them on consoles in the past) and this game was Thief. I decided to download and install the game through the client like I'm supposed to. Once it had finished, I went to launch the game and was greeted by the error message below. 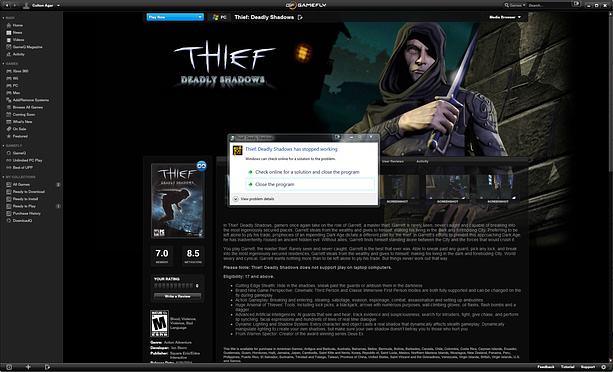 I went through all the troubleshooting steps, redownloaded the game, and reinstalled the game with no luck. When you look at the GameFly user reviews of this title you'll see a common trend of people dealing with the same thing. 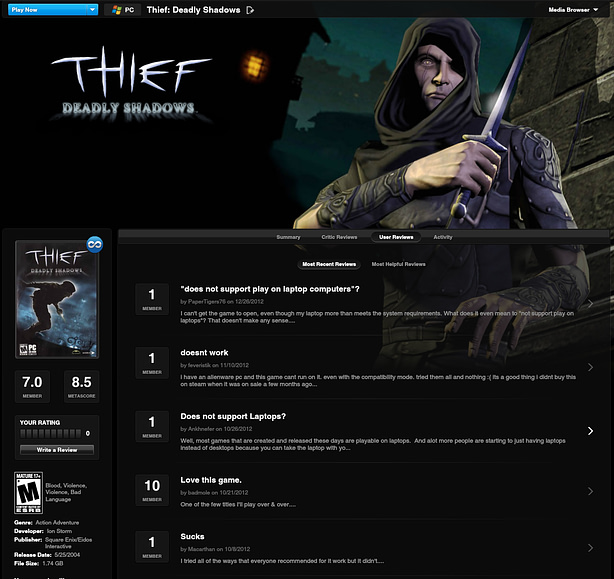 Another downfall of this whole Game Client is that it is PC only with no support for Macs. From what I understand you are able to download a Mac version of the client, but there is no games available for “unlimited play” thus making it pretty useless.

Another big downfall is their pricing. $15.95 a month is pretty steep for a single game considering competitors such as Blockbuster allow 1 disc at a time for $9.99 and 2 discs at a time for $14.99! Blockbuster's selection is very similar and also includes the option to do in-store exchanges. Taking all this into consideration and the issues above,$15.95 a month is money that is not well worth it in terms of value on the dollar provided by the GameFly service especially considering Blockbuster's rates for what seems to be a superior option.

Having put the GameFly service to the test through the 30 day trial I can honestly say the service does not live up to its hype. It seems to be overpriced and under performing. Their shipping times were too slow, their PC client worked horribly, and their pricing is too expensive compared to competition such as Blockbuster. For anyone looking for a serious service such as this you will likely want to checkout Blockbuster's instead since they also have a 30 day trial (in which I will be reviewing in the coming month). To sum it up, GameFly is not a service that I believe is valuable enough to spend your money on and I do not recommend it in almost all cases.