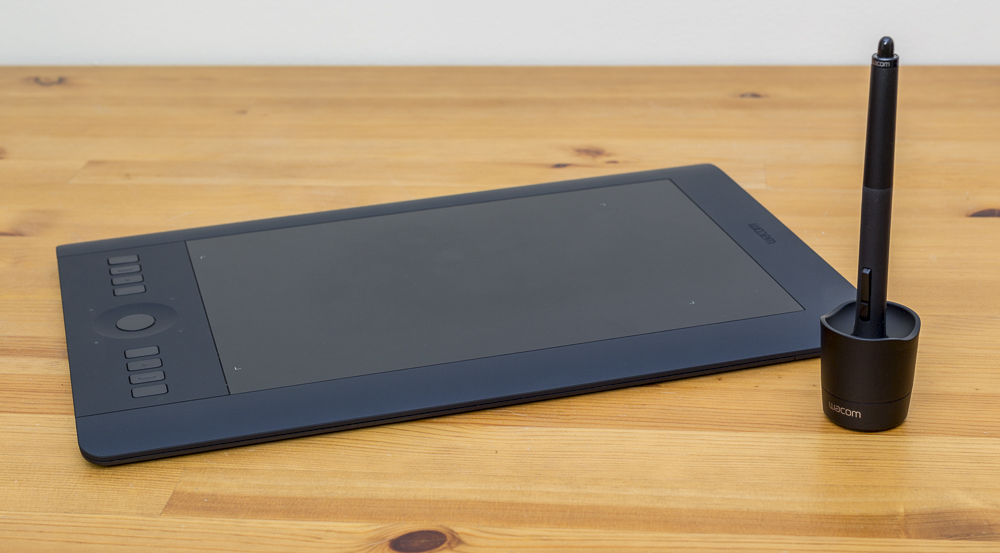 Get The Best Price On A Wacom Tablet

When you heard of the term ‘tablet' today, chances are most of you think of an iPad or a Kindle. If you are a graphic designer, photographer, or video editor then a different kind of tablet might have come to mind. I am referring to a drawing or editing tablet such as those produced by Wacom. To be more specific, their line of Intuos Pro tablets cater to both amateur and professionals multimedia artists who are looking to gain efficiency and improve their workflows.

Photo editing and retouching is a daily task for me so I invested in a Wacom Intuos Pro Pen and Touch Medium tablet (PTH651) to help speed up my editing process and improve the final result. The medium-sized option is currently priced at $306 via Amazon and offers a great deal of benefits over Wacom's lower-priced Intuos line. 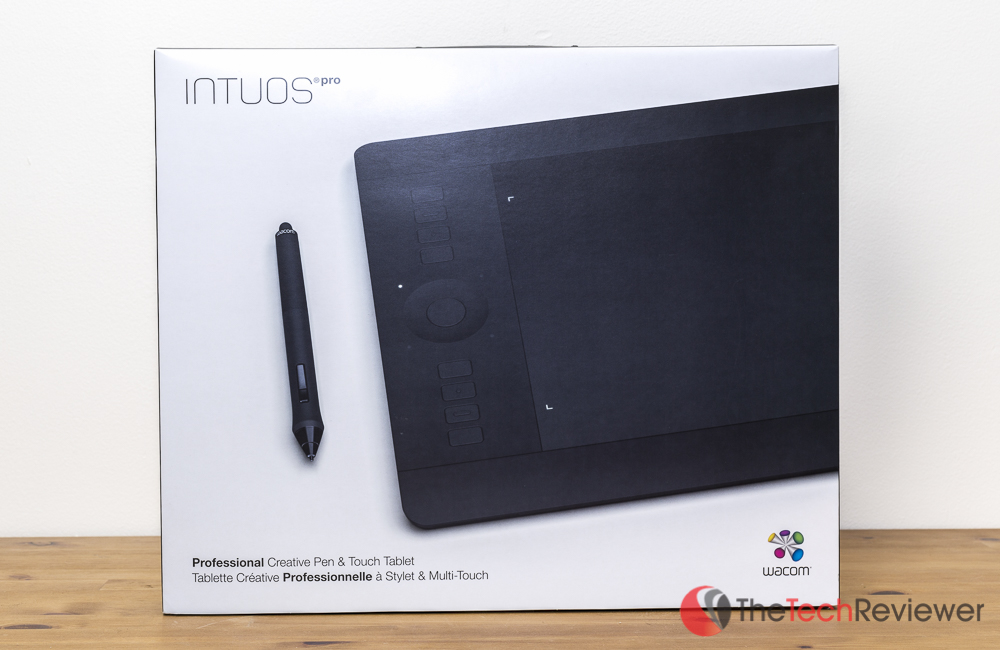 Throughout the rest of this article, I will share my first-hand experience using the PTH651 model and discuss both the good and the bad aspects. Keep in mind, I paid retail price for my review unit and this review is not sponsored or endorsed by Wacom in any way. Rest assured, this is my honest opinion and no outside influences had any affect on the outcome of this review.

Wacom designed this tablet to be relatively slim and lightweight with the medium variant being comparable to the size of my 15″ Retina Macbook Pro. 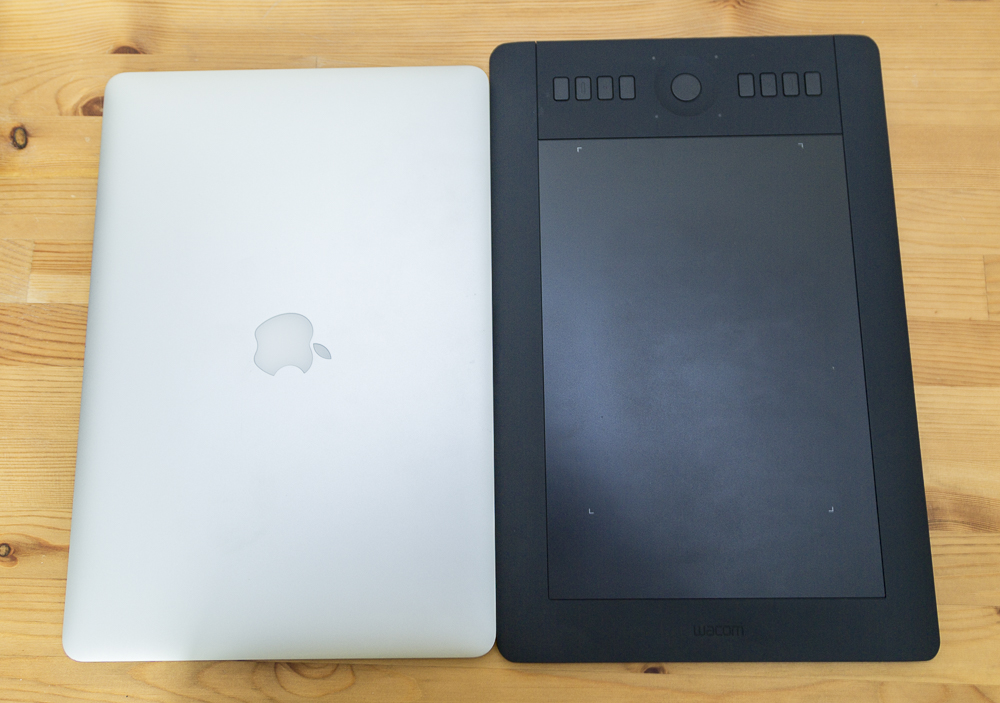 The tablet is intended for a right handed user with the buttons and scroll wheel located on the left and the touch sensor on the right. If you are a left handed user like me, you can enable “left handed mode” within the settings of the included Wacom software and rotate the tablet 180 degrees. The bottom of the tablet features four pads to prevent accidental slipping when used on a smooth surface.

The build quality of the Intuos Pro matches the retail price meaning it is substantial in the hand and build materials do not give off a cheap feel. Since this type of tablet is intended for stationary use, it is built to last several years and hasn't shown any wear despite being regularly used for the past six months. Should you wish to pack it in a backpack while traveling or on the go, I don't foresee any potential for harm as long as no excessive pressure is placed on the bag or case of which it is stored within.

The included pen stylus is around the same size as a Sharpie. On the bottom, you have a pointed pen-like tip and on the opposite end you have a larger more rounded tip which functions as a virtual eraser. Above the pen-tip, there are two buttons surrounded by a soft, grippy material. These buttons function as the left and right mouse clicks that you'd find on a traditional mouse.

The build quality of this stylus is excellent, and the pen-tips are interchangeable as they wear down after extended use. Wacom includes one tip in the pen by default and ten replacement tips which can be swapped at any time. The handy thing about these replacement tips is they are all neatly stored within a branded Wacom dock (included) which holds the stylus when not in use.

With the Intuos Pro, you get both the functionality of drawing via the supplied pen stylus as well as taking advantage of the touchpad to execute multi-touch gestures. With the Intuos Pro series, you have 8 Express Keys which are all customizable using the included Wacom software. Between the two sets of Express Keys, this tablet offers a scroll wheel much like you'd find on an old-school iPod. 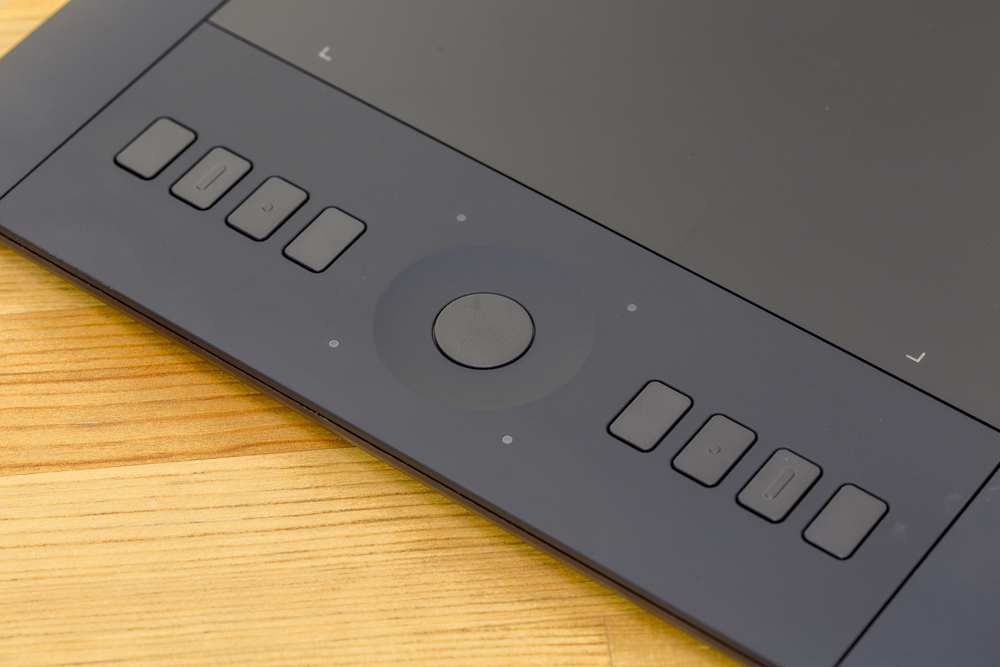 You can rotate your finger around the wheel in a clockwise or counter-clockwise motion to increase or decrease the element in question. To toggle between these elements, there is a circular button in the middle of the wheel that will switch between one of the four options. Again, the elements found within this scroll wheel can be configured via the Wacom software.

The Pro series includes the wireless accessory kit (a $45 value) which allows the tablet transmit its signal via a USB dongle. While this adds great versatility to your workstation, it still needs to be plugged in via a USB cable to charge the battery every so often depending on how much you use it.

The “pen and touch” functionality is rather self-explanatory as you can utilize the included pen stylus for precise editing as well as your fingers for navigating between windows and carrying out multi-touch gestures. This is particularly useful on Mac OS X as it works with the native multi-touch gestures that are built into the operating system. The touch portion can be turned on and off to so you don't accidentally trigger the touchpad.

One of the coolest things about the pen stylus is that it works without the use of any magnets or batteries. When coupled with the Intuos Pro series, you get 2,048 levels of pressure and tilt sensitivity thus allowing for extreme precision when drawing, editing and manipulating.

While the Intuos Pro line is geared towards serious amateur or professional designers and artists, Wacom also offers a standard Intuos line which offers a more basic tablet for a significantly cheaper price. The Intuos Pro differs from its cheaper sibling by a better build quality, more customizable buttons, double the pressure sensitivity and the included wireless accessory kit.

I've been utilizing the Intuos Pro for the past eight months or so on a regular basis when working with digital photos and video. The main three software that I use it with is Photoshop, Lightroom 5, and Final Cut. Straight out of the box, the tablet supports all three pieces of software although the pressure sensitivity is only relevant when using Photoshop. I was hoping the ‘spot removal' tool within Lightroom 5 would be able to harness this pressure sensitivity although it does not. This type of issue could be more to blame on Adobe than on Wacom so be aware of potential incompatibilities with software that is less mainstream.

The included Wacom software to run this tablet is extensive and allows you to customize nearly every aspect within just a few windows. These customizations include aspects like binding ExpressKeys (which can be done on a per software basis), configuring pressure sensitivity, adjusting pointer speed, and changing the tablet's orientation.

This medium size measures in at 15″ by 10″ however, the touchpad only utilizes a 9″ x 5.5″ portion for operation so it is a bit tricky as it looks like you have a lot more usable room than you do in reality. This means anywhere outside the red dotted area below will not respond to your finger or the pen stylus: 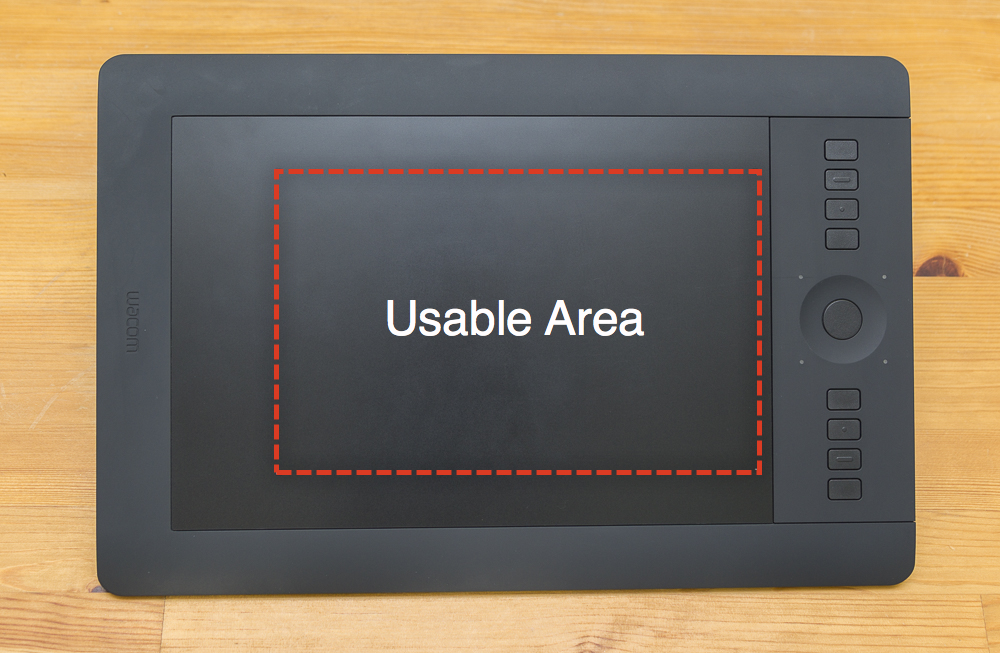 Now the 8 ExpressKeys found within the Intuos Pro models are useful however I've run into a few issues utilizing them with multi-monitor displays. For example, I used to run a three monitor workstation with a 27″, 30″, and 20″ monitor vertically. When you lightly touch an ExpressKey with your finger, an overlay is supposed to pop up on the screen and tell you what function this ExpressKey is bound to. However, the software would not function properly on my multi-monitor display and wouldn't show this overlay correctly. This made is very difficult as it is tough to remember which ExpressKey was for what when they are bound differently on a per software basis.

Additionally, the multi-monitor setup didn't allow me to utilize “precision mode”, a function that dedicates the entire tablet's touchpad to a small (3″ by 2″) box for ultra precise editing situations. Now let me clarify, this does not mean it won't work with every multi-monitor situation although it certainly has the potential to cause issues. My 30″ display recently malfunctioned, so I switched to the 27″ coupled with a 20″ in portrait and have yet to have any problems utilizing the Wacom software despite running a 2-monitor setup.

Moving past these software difficulties, the tablet functions exceptionally well in a real-world situations. Retouching photos has never been easier and utilizing the pen tool for editing clips on a Final Cut timeline is much more fluid than a traditional mouse. Making the switch to a tablet has been effective in improving my workflow and also offers a more ergonomic solution for long editing sessions.

I have found Wacom's Intuos Pro to be a stellar multimedia tablet, and its use has significantly improved my editing workflow. The hardware is well designed and features a solid build; however there are a few bugs when dealing with the Wacom software including issues with a multi-monitor setup and limited support for programs such as Adobe's Lightroom 5. If you're a professional who is looking to invest in a tablet for multimedia manipulation, I will highly recommend Wacom's line of Intuos Pro tablets. If you're simply a consumer who is looking to utilize a tablet for recreational use, you'll likely be better off saving some money and choosing to one of the regular Intuos tablets.