Get A VX2252mh For The Lowest Price

ViewSonic recently released their VX52 Series of gaming monitors which feature ultra-fast response times, incredibly high contrast ratios, and built-in stereo speakers. These monitors cater best to gamers who are on a budge and are suitable for use with computers, game consoles or cable boxes.

We had the chance to demo a ViewSonic VX2252mh Monitor for the past month so this review is based on our first-hand experience using the monitor on a day-to-day basis. It is also important to note that ViewSonic also offers an identical 24-inch model known as the VX2452mh. This review applies to both the VX2252mh and VX2452mh models in terms of design and performance as the only difference between the two is the screen-size and pricing. 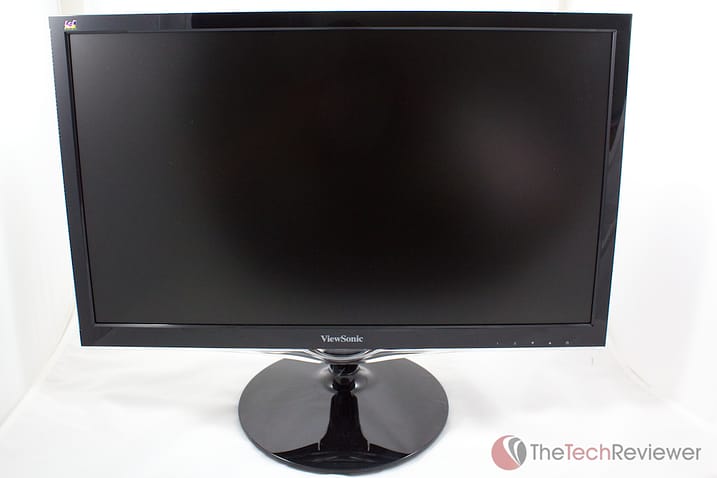 Cosmetically, ViewSonic did an excellent job designing this model. The LED panel is thin and the glossy black finish compliments the contours of the structure nicely. On the bottom of the display, there is a clear plastic piece which illuminates in different colors to indicate whether the monitor has an active connection or not. A blue glow indicates an active signal and a red glow is present when it is receiving no signal. This may be a nuisance to some, but personally I think it suits the overall look and will fit well with gamers especially since many consumer gaming accessories emit their own blue glow.

While the appearance catches your eye, there are a few noticeable trouble points in regard of the monitor's design. First off, the slim LED panel is supported by a similarly small stand. This stand matches the overall look, but it is not all that practical and doesn't offer the panel with much support. This can cause the panel to wobble if you rest it on an unstable table or surface. I don't see it being a huge deal to most consumers since it is a stationary product and won't be moved often. However, if you plan to use this monitor in a location where a child or pet could unintentionally knock it over then I'd recommend looking at competitors which feature bulkier, but more stable designs as the VX2252mh can be vulnerable to accidental damage.

Another element that is noticeably lacking is the number of adjustable components on the monitor. With many of the higher-end monitors, you're able to adjust the tilt, orientation, height, and viewing angle. Due to the low price-point, ViewSonic only included the ability to tilt the panel (forward 0º, back 20º). While I didn't experience any issues with viewing angles, it would be nice to be able to further adjust the monitor's height and orientation if you feel the need.

The inputs are all evenly spread rear of the panel allowing you to have multiple connections simultaneously without it becoming too cramped. The OSD (On Screen Display) buttons can be easily accessed in the bottom right corner of the display yet the buttons are tucked away nicely to match the sleek appearance.  The VX2252mh is comprised of durable, high-quality materials which should keep it looking nice and operating for years to come.

The ViewSonic VX2252mh is feature-packed and will give any 22″ monitor in the sub-$160 price-range a run for its money.

Throughout the past month, we've thrown the VX2252mh into a variety of different scenarios and the monitor surpassed our performance expectations in the majority of area. As I stated earlier, this model is designed to be a gaming monitor, but it has the potential to be used a large variety of purposes which do not have to be associated with gaming. 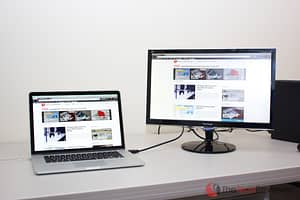 For example, you can easily use this monitor for business use with both a Mac or PC and it can be used as a stand alone monitor or simply as a 2nd display. Alternatively, you could hook this monitor up to a cable box, Blu-ray player, Xbox 360, PS3, or Roku via HDMI to watch TV, movies, and stream video content.

This model's strength is in the high-quality display which is tough to beat at such a low price. The panel puts out a crisp picture with vivid colors, suitable for both entertainment purposes or simply business use. Throughout our testing, we never noticed any ghosting or color streaking and the backlight was evenly spread. Depending on what you're looking to use it for, you may feel the need to adjust the brightness/contrast settings (easily done through the OSD) although we found the settings were well-calibrated straight out of the box.

The VX2252mh comes with built-in speakers, but the problem with these speakers are they are only 2-watt and not capable of much in terms of audio performance. While they are adequate for a quiet setting, I wouldn't consider them suitable for gaming or entertainment purposes. Luckily, the rear headphone input allows the use of headphones, standard computer speakers, or an external sound system.

An example of this happened during our testing, we were using this monitor to play GTA V on the Xbox 360 near an open window that is directly located by a highly-traffic road. The background noise of the cars passing outside the window actually overpowered the VX2252mh's speakers which made it difficult to hear the dialogue between the game's characters. Don't get me wrong, the built-in speakers are a nice touch, but you'll want to invest in a cheap set of external speakers if you're going to need audio on a regular basis.

In the end, I found the ViewSonic VX2252mh monitor to be a sleek and well-performing monitor especially at its low price-point. While it does suffer from a slight stability issue and weak built-in speakers, the monitor's visual performance will match or outperform any competitors in the sub-$160 market. Personally, I would suggest saving up an extra $30 and purchasing the VX2452mh which is this model's 24″ sibling as you'll get the same great performance in a larger panel for only a small difference in price. From my experience, the ViewSonic VX2252mh lived up to the hype and I would recommend it to any prospective buyers.

Special thanks to ViewSonic for providing a demo unit to make this review possible!