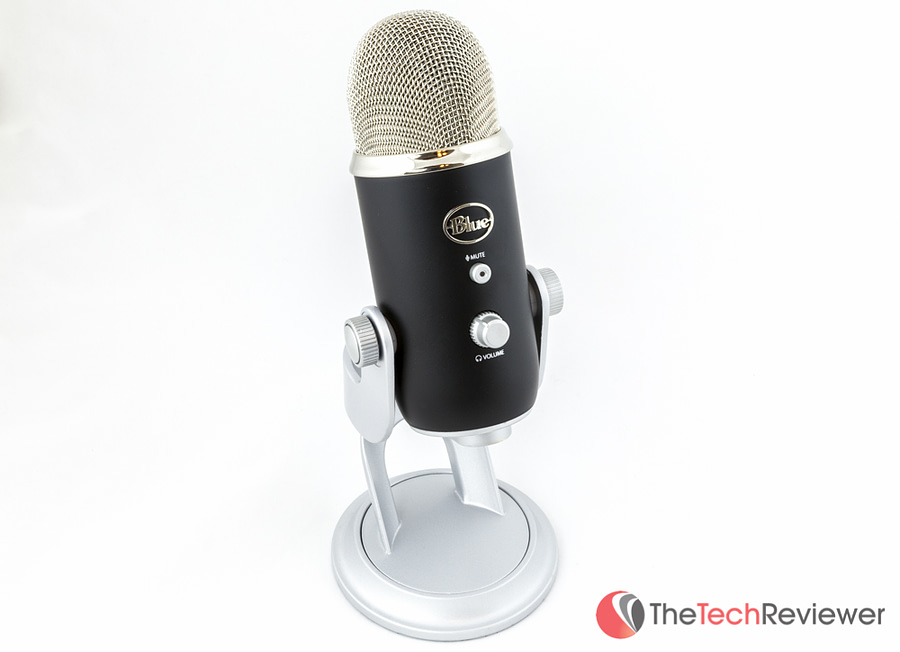 Get The Best Price On A Blue Yeti USB Microphone

Over the past few months, I have been investing in quality video and audio gear for use in upcoming video reviews and tutorials. One of my most difficult choices was deciding on a USB microphone that was capable of capturing crisp audio for voiceovers to match the exceptional 1080P video quality coming from my DSLR. After doing some research, I landed on the Yeti model from Blue Microphones.

Priced at $115 on Amazon, the Yeti seemed to have everything I was looking for in a USB microphone without breaking my $150 budget. Therefore, I purchased the “premium black edition” of the Yeti and have had it in my possession for the past 3 months. The following review of the Blue Yeti is my honest opinion of the product be based on my experience so far without any outside influences or biased affecting the outcome of this review.

It is important to note that I am not a singer or musician nor do I have any desire to record this type of thing. I have only utilized this microphone for voice-over style work so my impression will be based solely on utilizing this product for this type of purpose.

With a sub-$150 price-point, you would think Blue had to skimp on the build quality in an effort to save money. Despite a few small weaknesses, the Yeti is well-built and one of the most substantial USB microphones (non-XLR) that I've seen. 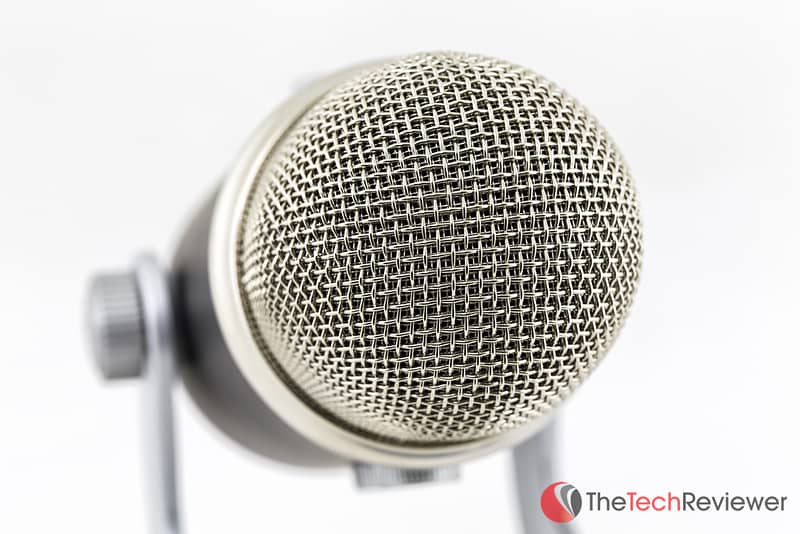 Starting from the bottom up, the Yeti includes an optional weighted base that holds the microphone steady while recording. The base looks as though it'd be on a swivel although it is deceiving as its locked in place. The bottom of the stand utilizes foam padding which helps it keep the microphone from slipping on a glossy surface as well as protecting your desktop and aiding in reducing vibrations.

The mic itself has an impressive build quality with Blue going really out of their way to craft a quality mic for the given price-point. The only real issue with the Yeti's build materials is the integrated buttons and knobs found within the microphone's chassis. They are made of cheap plastic and don't match the type of quality found within the rest of the mic's components. Additionally, the knobs don't have that fluid feel that I was looking for. There is some friction and a slight grind to them when adjusting their position. I know I can't be too picky at this price-point, but it would have been nice to see these buttons and knobs match the same build quality as the rest of the mic. 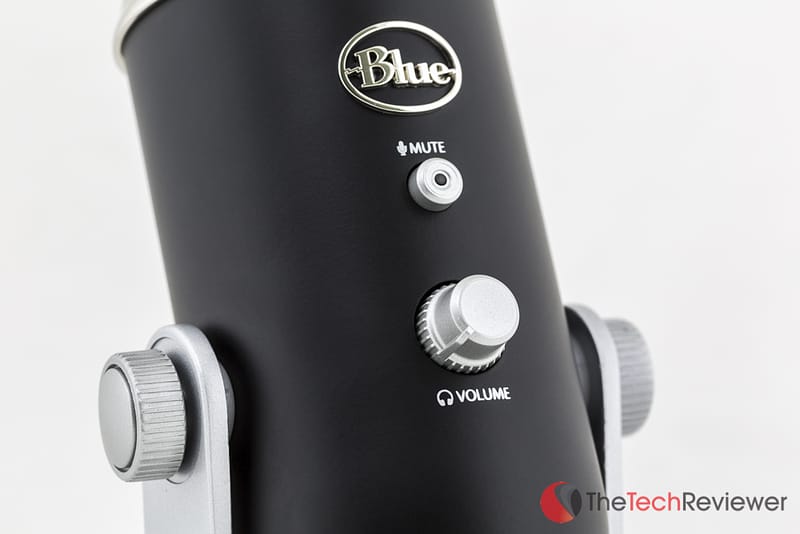 Cosmetically, the Yeti is a real home run as the design and the matte black and silver finish is classy. There is no obnoxious branding efforts as the Blue logos are subtle and flow well within the mic's design. It looks good on my desktop and compliments the sleek design of my 27″ iMac nicely.

The Yeti is feature-packed with plenty of options to suit anyone's audio-recording needs. To get a full run-down of the features found on this model check out the diagram below: 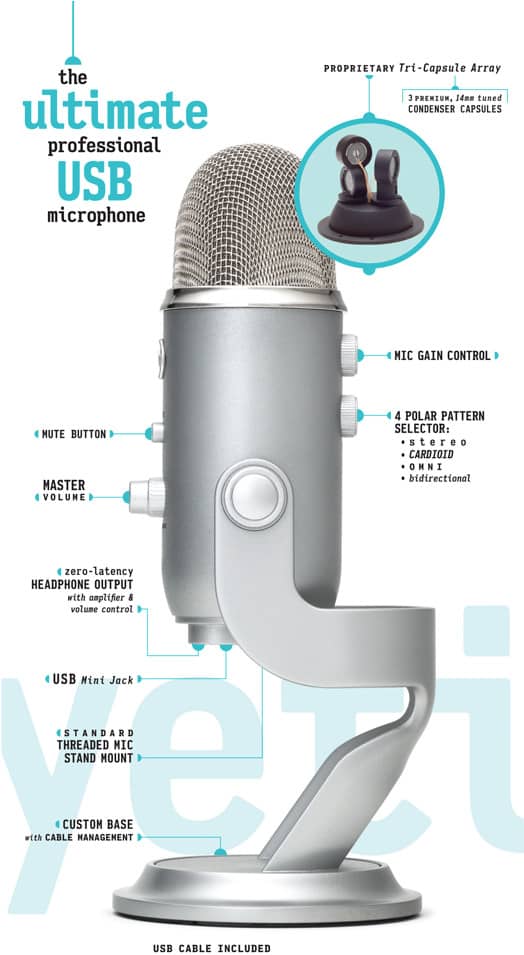 Like I said earlier, the base is entirely optional for use and I've been satisfied with its use on my desktop. However, if you want to really avoid vibrations or you simply don't want to keep this mic on your desk then you can utilize the threaded mic stand mount (located on the bottom of the mic) and invest in an affordable mic stand which will run you around $25.

Also on the bottom, you'll find a USB mini jack for connecting the mic to your computer as well as a headphone output for use as zero-latency audio monitoring. On one side of the mic, there is a master volume for controlling the headphone output as well as a mute button that can be toggled to turn the mic's audio recording on or off. 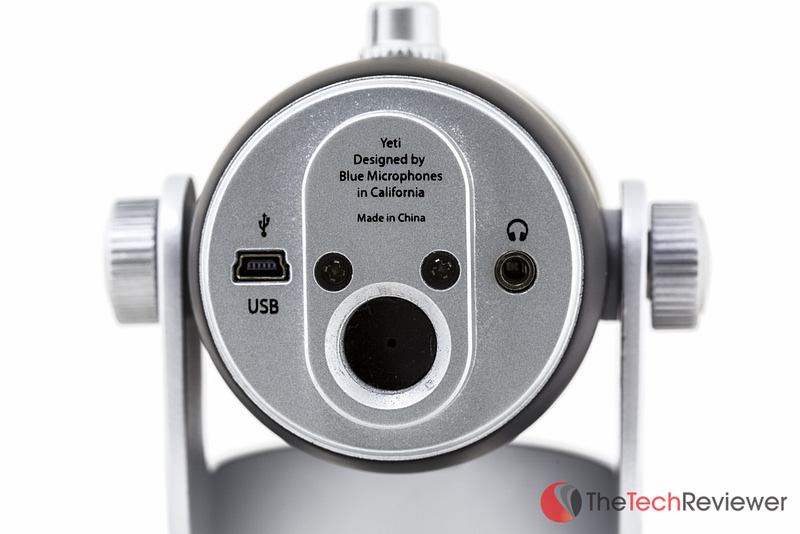 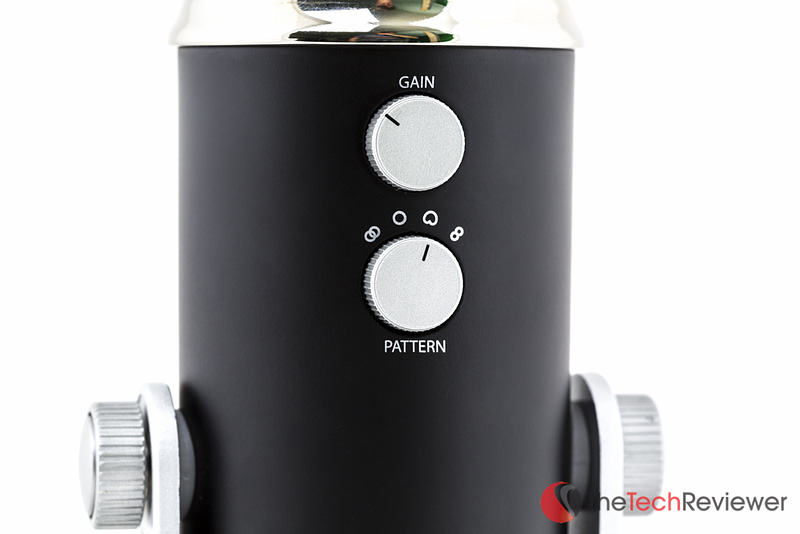 On the opposite side of the mic, you'll find the gain control knobs which is used to adjust the sensitivity of your mic's recording elements. Below that knob, there is another knob which is very important as it is used to select which polar pattern the Yeti will use while recording. To understand the difference between the four patterns, check out the diagram below which was taken straight from the Yeti's instruction manual: 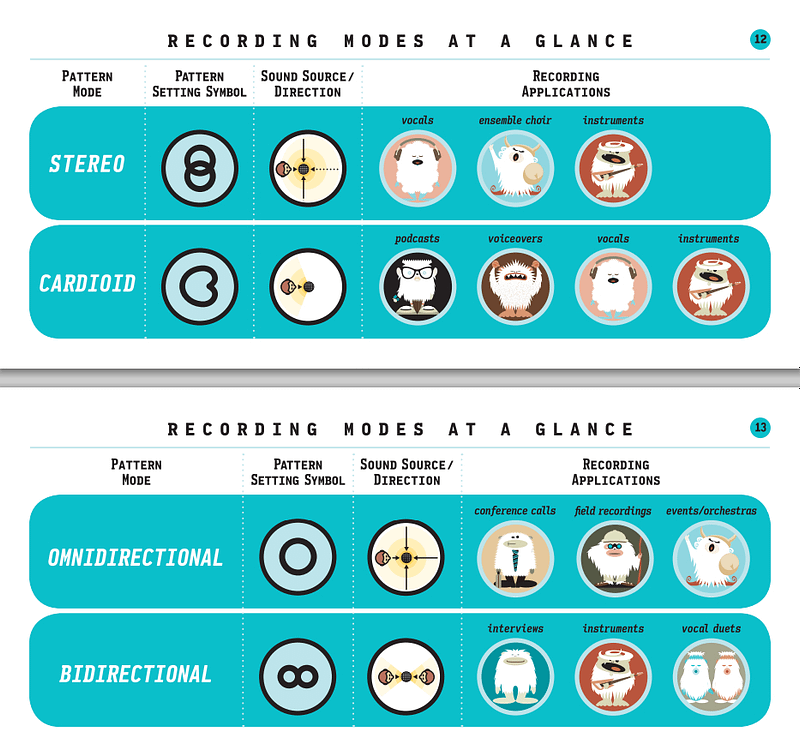 One thing the Yeti does not include that you'll likely want to purchase separately is a pop filter. Blue Microphones does sell a “universal” pop filter called the Pop, but it is priced around $25 and frankly, there are cheaper alternatives that get the job done. For example, I bought a generic pop filter from Amazon for $7 and it has worked great thus far. Best of all, this cheap pop filter even secures tightly to the Yeti's desktop stand without any modification.

One of the most popular questions that people ask on message boards and various websites involving the Yeti microphone is whether or not they should buy the Yeti or the Yeti Pro and what the actual difference is between the two. The Yeti Pro is the “upgraded” version of the Yeti (priced around $210 on Amazon) and thus offers both USB and XLR outputs. Additionally, the Pro is capable of recording a maximum resolution of 192kHz/24-bit whereas the Yeti is only capable of 48kHz/16-bit.

Besides that, the changes are minor and nothing notable enough to make a decision based off of. Basically it comes down to whether you'll need to record your audio in the higher resolution and if you wish to utilize the XLR output. Since I only sought to use the USB output (currently have no need for XLR) and my voice-overs don't require the higher resolution, I stuck with the standard Yeti model and saved some money in the end.

When it comes to performance, the Yeti impresses in virtually all aspects. Since I'm mainly utilizing the microphone for voice-overs, I stick to the Cardioid setting which keeps my voice crisp while canceling out most of the excess noise. Having the ability to switch to another mode (bidirectional, stereo, or omnidirectional) should the situation call for it is convenient and definitely a selling point for someone who plans to dabble in the many facets of audio recording.

I love the integrated headphone jack as it truly provides real-time monitoring of audio thus saving time when recording as your levels are always on point without needing to rely on any guesswork. I find the included desktop mount to be adequate for my needs though it is still affected by desk vibration. This means things like typing on a keyboard will be heard noticeably through the mic. Like I stated earlier, you can avoid this type of situation by investing in a mic stand for only a few extra bucks.

Since most consumers who are considering buying the Yeti are likely used to relying on a built-in microphone found within their laptop or desktop webcam, I thought I'd do a quick audio test to give you an idea of what type of quality the Yeti is capable of producing. The following samples are taken straight from a 15″ Retina MacBook Pro's built-in microphone, Logitech Pro HD C920 Webcam's microphone, and lastly the Blue Yeti microphone. There was no audio tweaking or adjustments made, these are simply RAW audio files straight from the source.

In the end, I've found the Blue Yeti to be an excellent USB microphone for those who are serious about recording quality audio from their PC or Mac computer. The build quality, features, and performance are exceptional for the sub-$150 price tag and provide great value on the dollar. If you're looking to capture higher audio resolutions or want to utilize an XLR output then you'll need to spend the extra money on Blue's Yeti Pro, but for most consumers the standard Yeti model will be more than sufficient. I am satisfied with my purchase of the Blue Yeti and I would recommend it to any prospective buyers as it is likely the best candidate at this price-point.