The Rokinon Cine CV14M 14mm T3.1 is the optimal wide angle lens for DSLR owners on a budget.

Wide-angle lenses are one of the most common choices for use when shooting architectural, interior, and landscape photography and they have also played a major role within filmmaking and cinematography. The trouble with most consumer-grade wide-angle lenses is their traditionally steep price tag especially when you're looking for models that are compatible with full-frame camera bodies. For example, popular lenses like the Canon EF 14mm f/2.8L II USM Lens sells for a whopping $2,359 and Nikon 14mm f/2.8D ED AF Ultra Wide-Angle Nikkor Lens sells for around $1,399.

The Rokinon Cine CV14M 14mm T3.1 Lens stands out from the crowd as it features both full-frame and crop-sensor camera support, a de-clicked aperture, and follow focus capabilities at a sub-$400 price-point. Today, we are going to take an in-depth look into this budget-friendly, super wide-angle model and see how it stacks up for the price. It is important to note that this review is also relevant for the following lens brands/models as the optics, build-quality, and design are identical although Rokinon's line of Cine lenses differs slightly due to the addition of a de-clicked aperture and follow focus support:

RELATED: What Are The Best Canon Macro Lenses?

For a lens of this price-point, you often don't know what to expect in terms of build quality. After unboxing, I was surprised to see how well-built the Cine CV14M and how substantial it felt in my hand. Weighing in at 1.4lbs, the lens is made from plastic though it is hard plastic, one that is much more durable than the cheap plastic used within Canon's $100 50mm EF lens.

The plastic housing is attached to the rear metal lens mount. Something that annoys me about this lens is that the red dot (aka the Red Lens Mount Index Dot) is only visible on the include of the lens mount and not on the outside barrel of the lens. This makes it extra obnoxious to try to line up with your DSLR camera body as the dot becomes hidden as soon as you put the lens flush to the camera body. While it isn't a huge downfall, it can be frustrating and may keep you from having the option to quickly switch to this lens on the fly.

The front of the model features a permanent plastic hood that protects the bulbous lens within it. It comes with a lens cover that secures over the hood to protect your lens and keep out dirt or debris while not in use. While this integrated lens hood has its positive aspects (protection, sun flaring, etc.), there is also a major downside. There is no way to attach a filter to the front of the lens (which also means you'll never have to deal with a stuck lens filter) in addition to no gel filter slot.

Moving down the barrel, the Rokinon Cine CV14M 14mm does offer a follow focus compatible focus ring which is often required for pulling focus during video shooting on a DSLR or cinema camera. I would have assumed this element would have been executed poorly at a lens in this price point, but to my surprise, the ring is well-built with a long, smooth throw that allows for maximum accuracy when focusing on both near or far subjects.

Near the rear of the barrel is the manual aperture ring which is de-clicked on the Cine model. Due to this, you can easily switch apertures with a smooth transition just by a twist of the aperture ring. Both the focus ring and aperture ring feature printed markings to help guide you on your adjustments and pinpoint the settings to your liking.

Due to the sub-$400 price tag, there are not a lot of advanced features included within the Rokinon 14mm especially when compared to Canon or Nikon's 14mm offerings. The de-clicked aperture and follow focus support are found within the Cine model, but the base model features standard rings for adjusting the focus and aperture. As I stated earlier, you do not have the option to add a front filer or a gel filter as this lens does not offer support for either. This isn't a deal-breaker for me personally although I know some photographers might say otherwise. It really depends whether you rely on the use of a filter on a regular basis or not and for me, I do not.

If you didn't know already, all versions of this lens (Rokinon, Samyang, Pro Optic, Bower, etc.) are fully manual which means you have to adjust both the aperture and the focus through the lens. There is no autofocus capabilities and the aperture (T3.1-T22) cannot be adjusted through your DSLR body like most other lenses. Additionally, there is also no image stabilization functionality so handheld shots will be more difficult to pull off cleanly, due to this I tend to rely on my tripod primarily.

In order to achieve the sharpest photos, I rely on my camera's 5x/10x digital zoom feature which helps me pull focus more accurately. This requires you to take your time when lining up a shot and can be time-consuming in some cases. This is surely a disadvantage when compared to the more expensive models with auto-focus capabilities, but I've found it more than tolerable for the difference in price.

If you're a Nikon shooter, there is a Rokinon 14mm (non-Cine) model which includes an automatic focusing chip. Now it is a common mistake to think this chip will allow the lens to “autofocus” for you. This isn't the case as it is only capable of alerting you when you've manually adjusted the lens into the truly focused position as well as provide metering and exposure information to your camera body. This helps make the aperture and shutter priority modes work as expected since the aperture setting is never communicated with the camera body without this chip.

While it is not a feature per se, it is worth noting that this Rokinon 14mm model is not considered a “fisheye” lens. It was designed in a way to avoid the fisheye look and instead give you a cleaner “super-wide” look. The downfall of this effort is some pretty funky distortion at times which I'll get into within the next section.

Since the Rokinon 14mm T3.1 is a wide-angle lens, most would expect some vignetting and the test results have proved this to be true. I shot a greyish-white wall in my office so the results are far more exaggerated than when your shooting a normal subject. If you use the Adobe Lens Profile Downloader, you can find a Lightroom 5 profile for this lens which will remove a great majority of the vignetting automatically in post. It is also important to note that a DSLR with an APS-C sensor won't get nearly as much vignetting as the sensor size will crop out most of the affected areas. 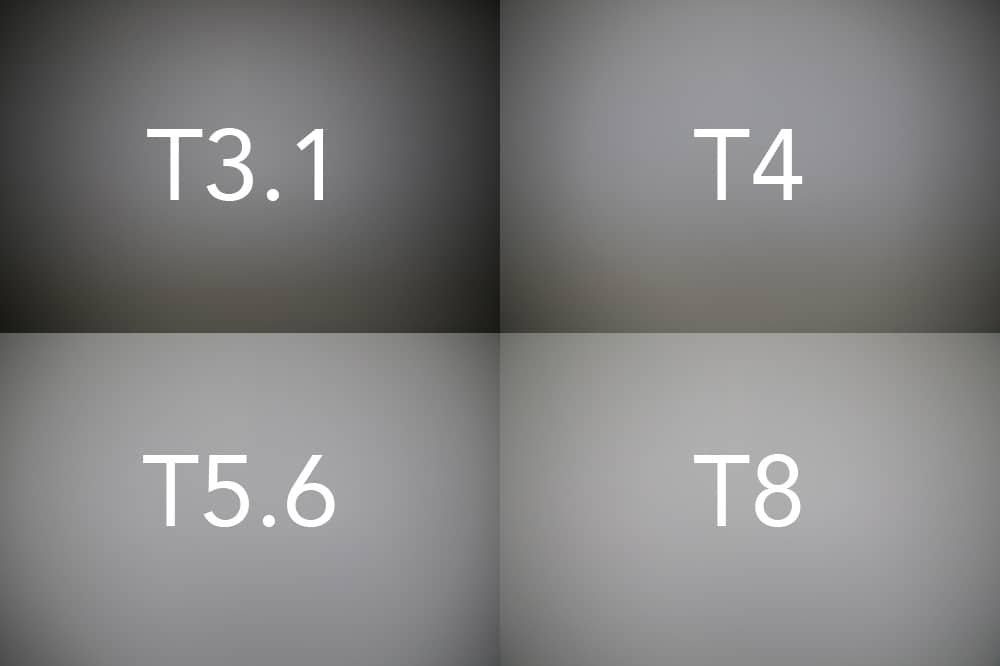 The Rokinon 14mm does suffer from some dramatic “mustache” distortion so you'll have to take this into consideration when using this lens. This is particularly annoying when shooting something like real estate photography where accuracy of the dimensions and resulting lines are necessary. From my experience, I've noticed the distortion increases when you get closer to a subject and if your camera is not level (both vertically and horizontally). I took the following image from roughly 6 feet with my 5D perfectly level on a tripod.

As you can tell, the first image has some noticeable distortion and the image is virtually unusable in this state. By popping it into Adobe's Lightroom 5 software and locating the “Samyang 14mm F2.8” profile, I was able to further correct my image and straighten out the warped lines within the garage door. While the edited version still suffers from minor distortion, the image is surely usable without drawing too much attention to the remaining trouble points. 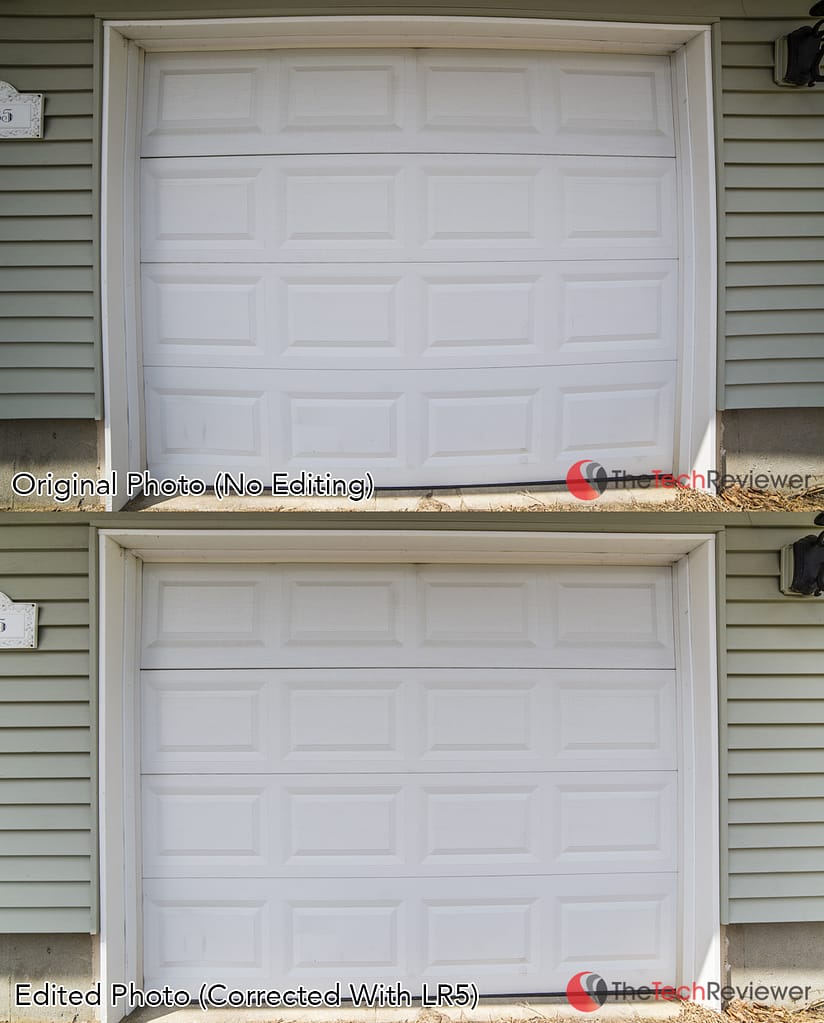 It is very difficult to compare the corner sharpness on a wide angle lens like this as vignetting and distortion aspects influence the corners so dramatically so I had no real way of implementing a suitable testing environment on a consistent basis. Instead, I decided to run a test to see how sharp this lens is within the center of a shot.

Each of the following shots were taken with on a level tripod just over a foot from the wall. I shot all of these with my 5D Mark III running identical settings minus shutter speed as I adjusted this depending on the aperture to make the shots look similar in terms of brightness. I did have to do some further tweaking in Lightroom 5 to get the colors to match to the best of my ability and the distortion was also corrected using the downloaded LR5 profile.

The top shot is the full shot and the following shots are a 100% closeup to compare the sharpness at each aperture level. From this test, it seems that T8 is the sharpest of the group with T22 looking the worst (diffraction) and T3.1 being a close second. Therefore, I'd recommend keeping your aperture set between T4-T11 if you're looking to achieve the sharpest images.

Since this lens works on both a full-frame (35mm) and crop sensor (APS-C) body, you'll be getting a different angle of view between the two sensors due to the difference in sensor size. This can be tough to visualize for someone in the market for a wide angle lens so I shot a quick comparison between my 5D Mark III (35mm) and my T3i (APS-C) from the same exact same tripod position. The supplied angle of view information was taken straight from the specifications listed on the manufacturer's box. 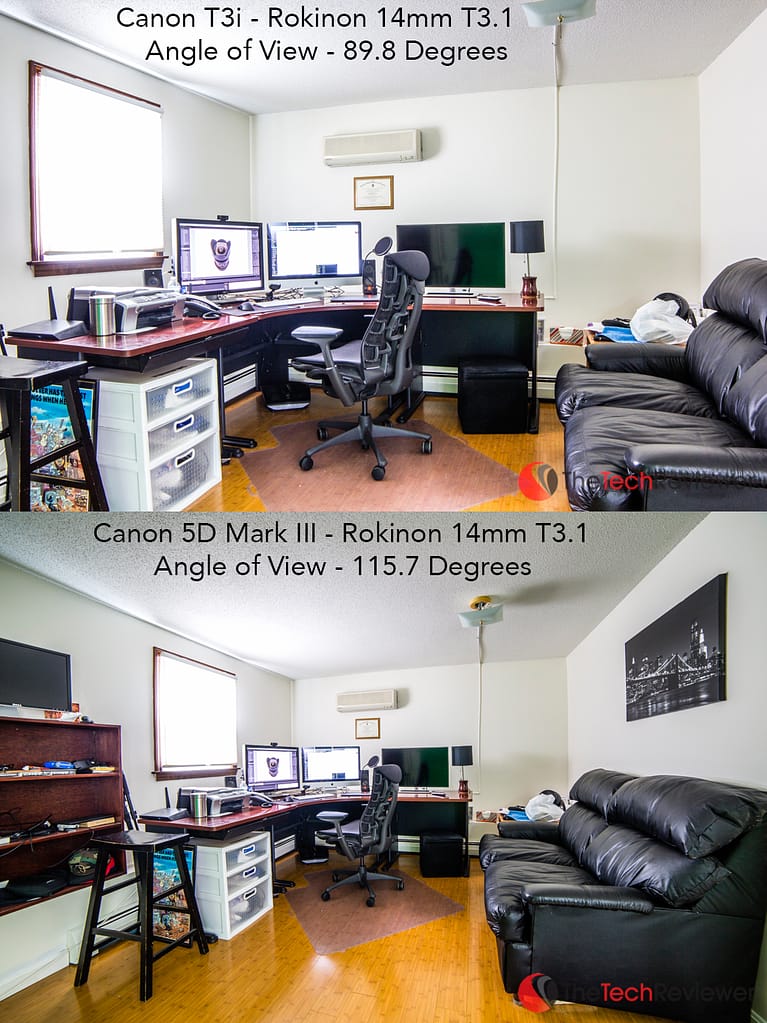 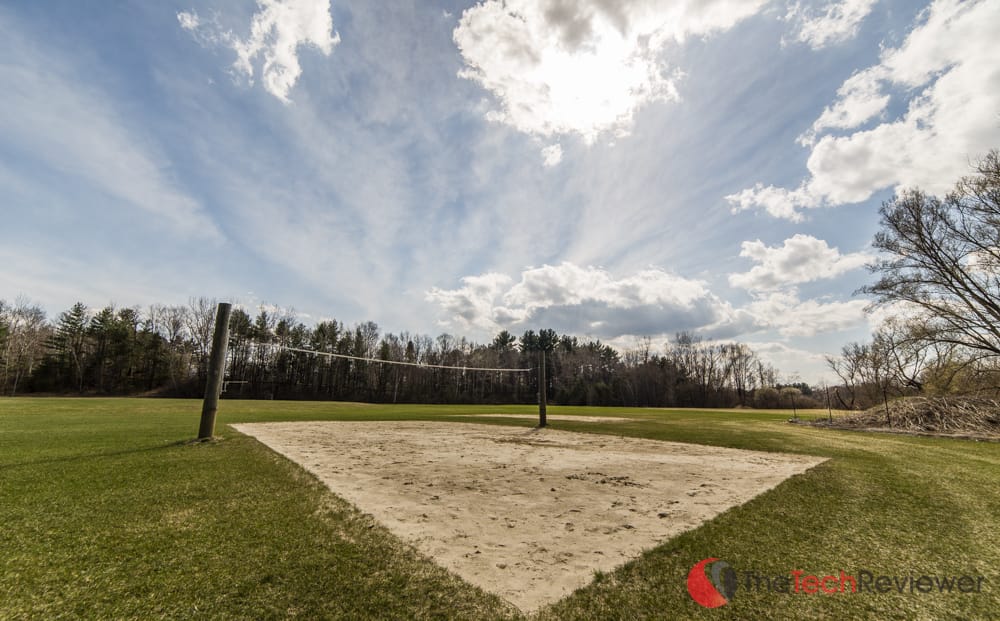 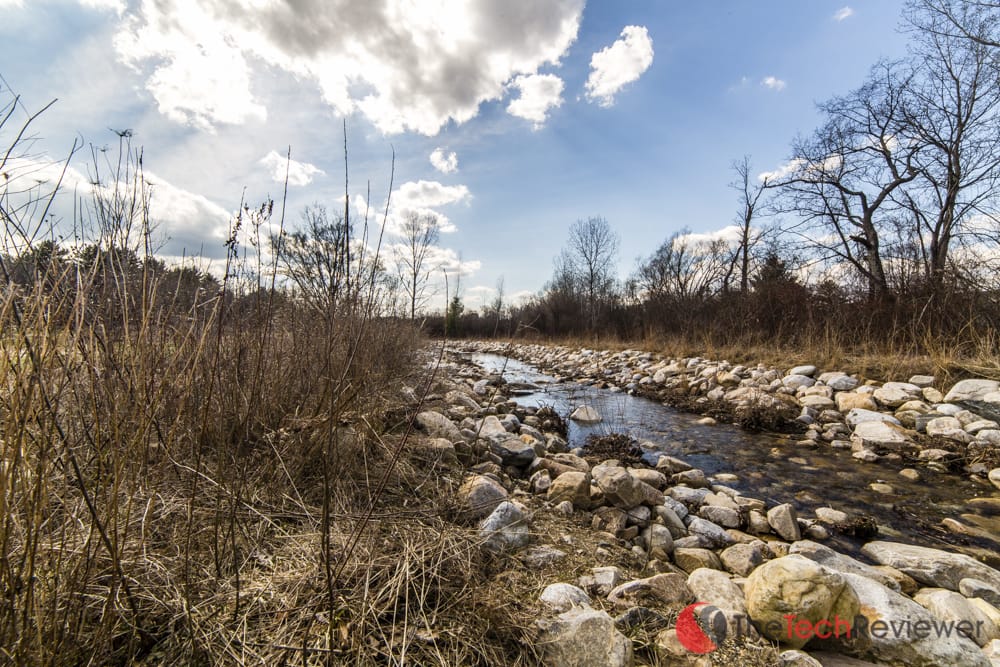 The Rokinon Cine CV14M 14mm T3.1 Lens is an excellent wide-angle lens for DSLR owners who are on a budget. While it lacks the advanced features and high-quality optics you'd find in a more expensive wide-angle model, it is impressive for the price and should be more than adequate for most DSLR owner's needs. If you're in the market for a super wide lens option and want to spend under $1,000 then the Rokinon, Samyang, Pro Optic, or Bower 14mm variant is surely an option to consider. I would recommend this lens to any prospective buyers as I believe it offers a real bang for your buck especially from a consumer standpoint.