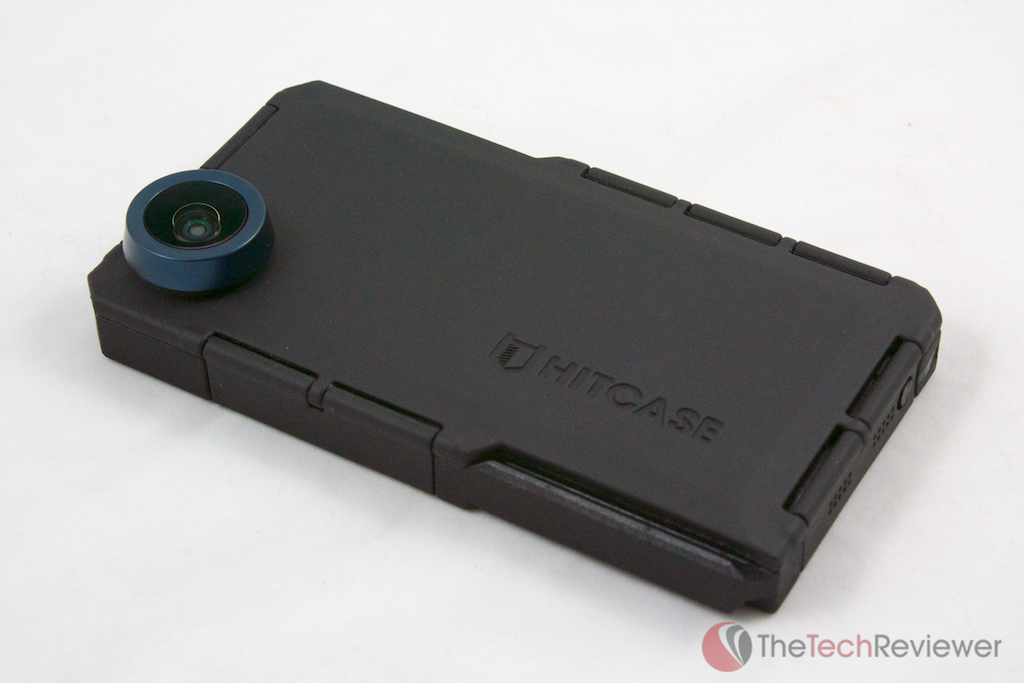 The HitCase Pro is a waterproof and shockproof iPhone 5/5s case with a built-in wide angle lens.

The GoPro camera has truly innovated the world of film and modernized what we consider to be an action sports camera. The main problem with the GoPro in many consumers' perspective is that it is just too expensive to fit their budget. If you find yourself in this situation and own an iPhone then I might have just perfect solution for you. It is called the HitCase Pro and it's an ultra-rugged case for the iPhone 5/5s (4/4s model also available) that features a built-in wide angle lens for capturing HD video as well as professional quality photos. 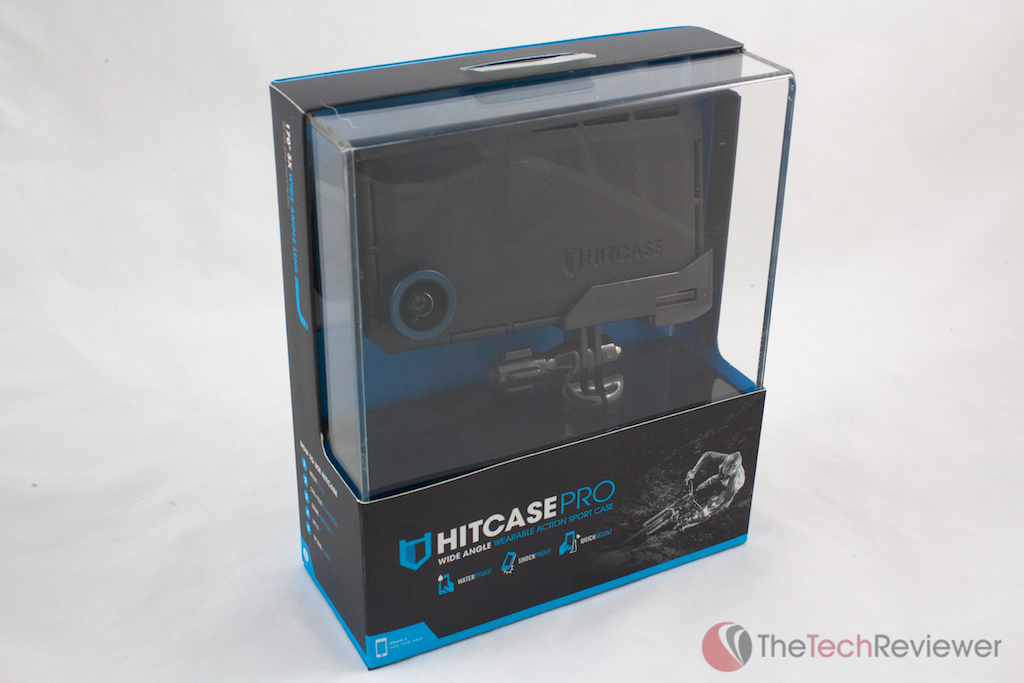 While the HitCase Pro is not the most affordable iPhone case, the $129.99 price tag is much easier on the wallet than the $200+ expense you'd be hit with when buying one of GoPro's current models. Included in the impressive packaging is the HitCase Pro itself, a Tripod TiltR, a GoPro® Compatible Railslide™ Mount, a StickR Mount (perfect for helmets), a wrist strap, and of course the quick start guide.

Anyone who gets a chance to check out the HitCase Pro in person will see that some serious engineering went into designing a case with these capabilities into such a small and lightweight form. The exterior of the design is a tough ABS/Polycarbonate exterior shell that is impact resistant and has a textured rubberized surface that's easy to grip regardless of the weather conditions.

On the inside, the HitCase Pro utilizes their “ShockSeal” which surrounds your iPhone's sides with a layer of silicone and the back of the phone rests against their “ShockPad” which is made up of a custom impact absorbing Poron™. When used together these two components offer an incredible amount of shock absorption thus protecting your device from any falls or crashes it may encounter as well as helping to keep steady footage in high vibration environments such as car racing, motocross, ATVing, boating, etc. 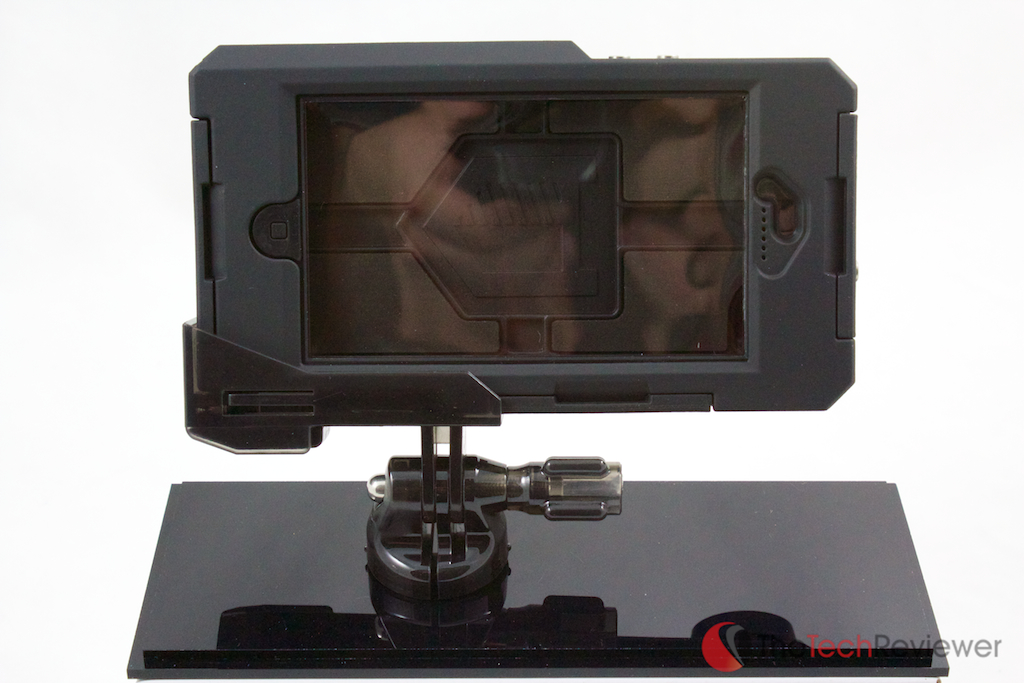 The screen is covered by a tough clear material (not entirely sure the exact type of material), but it feels very similar to the screen protectors found on the LifeProof cases. While this type of screen protector does an excellent job preventing accidental damage, it does allow a slight space between the screen protector and your iPhone's native screen which makes it a bit awkward to type.

It is a simple task to insert your iPhone with the process only requiring you to snap three latches which secure tightly on the three sides as the forth side is already secured by the hinge assembly. The fit is very snug, leaving no extra room for your iPhone to rattle inside the case. This tight seal also makes the case waterproof for up to 10m or 33 feet. This enables the case to be taken while swimming, surfing, jetskiing, snowboarding, or other action sports whose wet conditions pose a serious risk to an unprotected iPhone.

Removing your device is just as simple since the three latches can be disengaged quickly. In fact, HitCase boasts it only takes 3 seconds to remove your device and I'd estimate that to be fairly accurate. What is the downfall of this design you may ask? Well, there is no access to your charging ports or headphone jack which may be frustrating for some users.

I put the HitCase through the works bringing it with me while cycling, running, frisbee with my dog, swimming, and even latched it to the top of my friend's car and went through a touch-free car wash that uses high-pressured water jets and powerful heated air guns. The case performed extremely well and does not show any wear or tear from the elements it endured. The custom lens increases the FOV by a long shot with excellent clarity thus producing footage that looks more professional and cinematic. 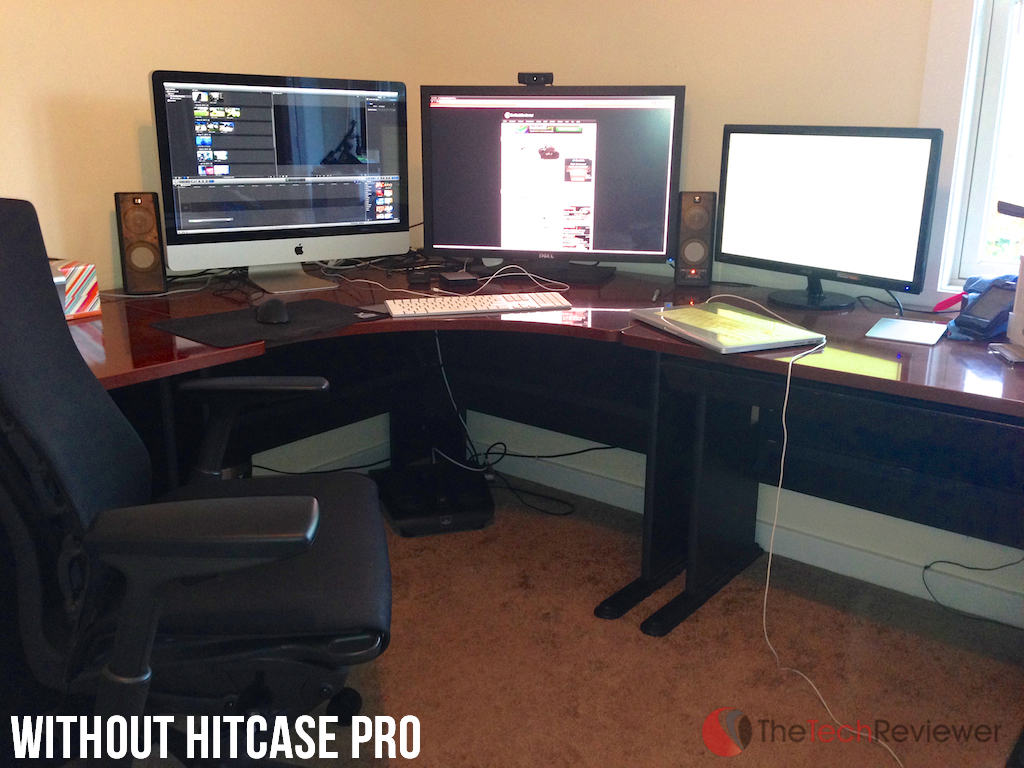 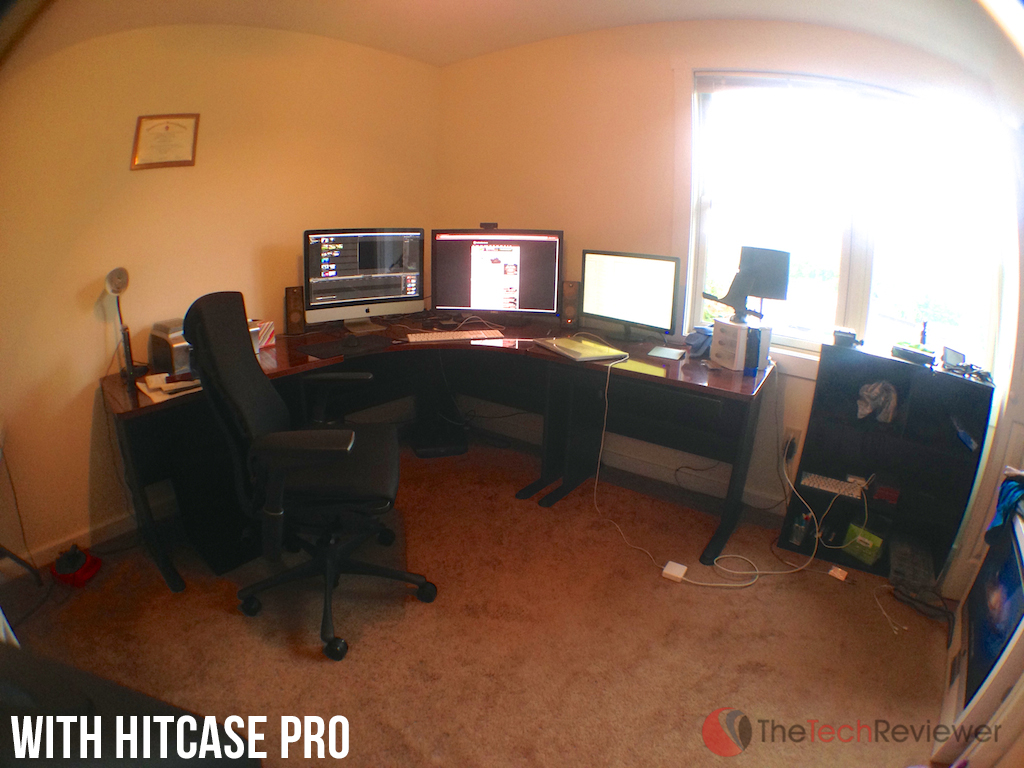 The Railslide Mount system is a real winner allowing you to attach or detach the HitCase Pro from compatible mounting solutions in a mere second or two while still staying secure when in use. Another great advantage is the fact that your iPhone is easily accessible to the Internet which allows you to instantly upload any photos or videos you take while using the HitCase Pro without the need to use computer.

As for HitCase's execution with their Pro model, they hit it right on the head in terms of their purpose with the product and it shines in nearly all aspects. However, I don't know if a HitCase Pro can exactly compete with a GoPro due to a few reasons which aren't necessarily the HitCase Pro's fault, but more to blame on its iPhone's counterpart.

First off, is the obvious difference in size. The GoPro can fit in smaller spaces and is lighter which in some cases will significantly less noticeable for the user while in use such as when mounted to a head or helmet.  This isn't a major problem for most users as a viable alternative is to mount the case to your vehicle or chest while still achieving a similar POV-style result. 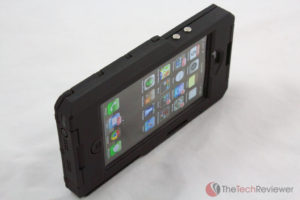 Secondly, is the limitations of your iPhone in terms of battery life. As we all know, the iPhone isn't the most energy-efficient device and you're often lucky to get a day's worth of use out of it before needing to pump in some more juice. Unlike the GoPro, you can't buy an extra battery and simply swap it out once your battery dies while your on the trail or hitting the slopes. This makes it rather inconvenient as not only do you lose the ability to take footage when the battery drains, you also lose the ability to contact anyone with you iPhone should you get lost or injured.

To combat this issue, HitCase has designed their free Vidometer app which allows you to customize your video output and includes power-saving functionality that will such off your screen during use (to extend battery-life) while still allowing you to capture footage. This does help, but not enough to overcome the lack of interchangeable batteries that the GoPro has the advantage of. I initially hoped I might be able to hook up an aftermarket battery pack to give a significant boost to the battery life, but since the charging port is not accessible with the HitCase Pro equipped, this is not a viable option. 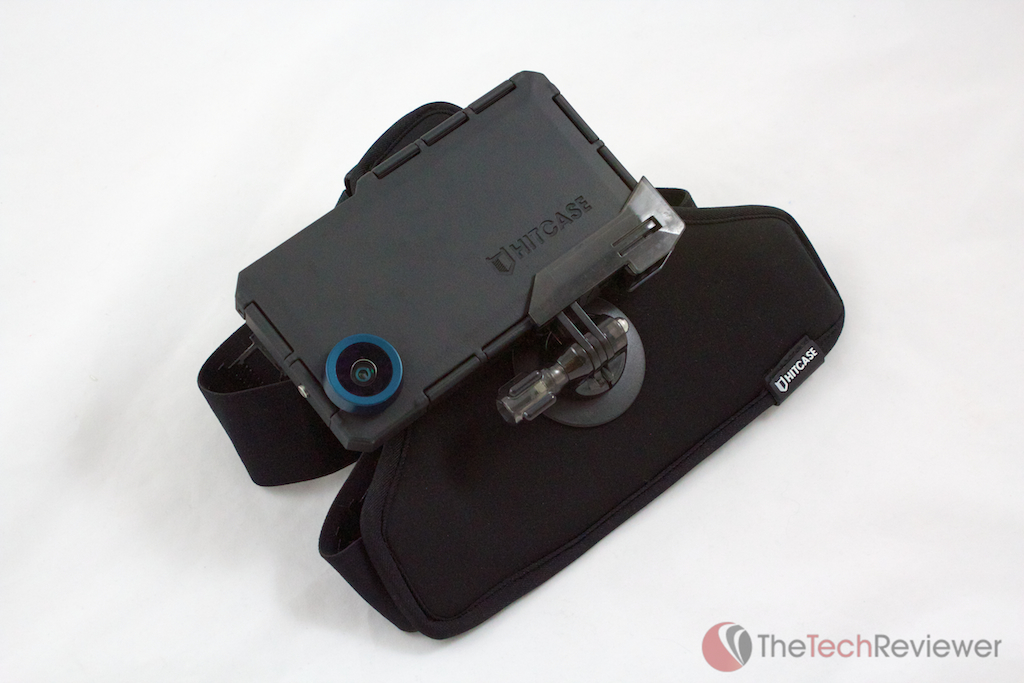 Another issue with the iPhone depending on your model is the limitation of its storage size. If you're like me, you probably settled for the base iPhone model which features 16GB of storage as it was the cheapest option. Unfortunately, this 16GB only contains 13.8GB of usable storage space which you will need to share between your standard iPhone data (such as contacts, notes, music, apps, videos) and your HitCase Pro footage. Unlike the GoPro, you don't have the ability to just throw in a new memory card once your storage fills so your potential recording time will directly depend on how much free space you have available. To make matters worse, I found the Vidometer app caused each file size to be much larger than a standard iPhone video as each file stores an array of extra metadata for use with the optional HUD.

Lastly, since the iPhone's microphone is located within the enclosure, the sound sounds significantly muffled when played back. If your really looking to use this product while enjoying an activity that requires audio capture then you'll likely want to invest in an external microphone or look into spending more on an actual GoPro model.

In the end, I found the HitCase Pro case for the iPhone 5/5s to be well-engineered and built with quality in mind. It performs to the best of its abilities however it often faces limitations of its iPhone counterpart. While it can't exactly compete with a dedicated GoPro camera in many aspects, it is more than sufficient for capturing action-sports, hobbies, or family videos on a casual basis as well as taking stunning wide-angle photos. If you are on a budget and want to get more out of your iPhone in terms of its video and photography capabilities than the HitCase Pro is a solid investment. I would recommend this case to any prospective buyers as long as you realize that your iPhone may encounter limitations mainly due to its battery-life and storage size.

Special thanks to HitCase for sending us a sample to make this review possible!