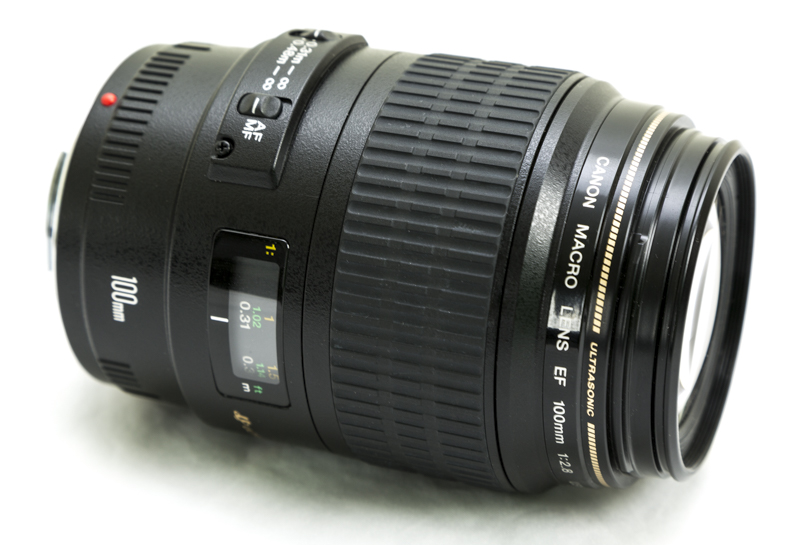 Macro photography often results in some of the coolest shots that can be achieved with a DSLR. In order to accomplish a successful macro-style shot, you'll need to invest in an appropriate macro lens. For Canon DSLRs, there are many models to choose from with prices ranging from $150 to more than $1600. However, many of the highest-rated macro lenses for Canon DSLRs are manufactured by Canon themselves often the brand of choice by professional shooters.

Today, we are going to take an in-depth look at the Canon EF 100mm f/2.8 Macro USM lens which retails for $599 through retailers like Amazon and B&H Photo. If you're considering this lens, you likely looking for a quality macro model  although you can't bear to drop $1,200 for Canon's 100mm L Series Macro. Don't worry, I was in the same boat and purchased the standard 100mm f/2.8 macro for both personal and business use.

Over the course of this review, I'm going to touch on my own personal experience utilizing this lens on a regular basis for the past 5 months. Keep in mind, this lens was purchased with our own company funds without any compensation or communication with Canon. Therefore, you can expect my 100% honest opinion without any outside bias or influences affecting the outcome of this review. I hope my opinion will help you decide whether or not this is the right lens for your specific needs. Keep in mind, this Canon lens is designed for their native camera bodies first and foremost, but it can also be adapted to work on Sony camera bodies as well as other competing mirrorless brands.

Canon's EF 100mm Macro features a traditional though bulky design. Weighing in at 21.1 ounces, the lens is rather hefty and may result in a front-heavy rig depending on your camera setup. For example, it doesn't feel that bad on my 5D Mark III with a battery grip as the weight is somewhat balanced. However, this changes dramatically when switching to my 70D as the camera setup then becomes significantly front-heavy.

Something to note about this lens' design is that the length will never change regardless of focusing. All the focusing mechanics (minus the focusing ring) are carried out on the inside of the lens so the internal barrel will never extend or retract like on some competing models. In addition, a lens hood is not included so the length will be consistent 100% of the time you use it.

The 100mm Macro's build quality is on par with most of the Canon lenses that fall into the consumer market (sub-$750 models). This means the quality is about average with a durable construction despite the majority of the build consisting of plastic parts. The plastic focus ring feels the cheapest out of all the components and spinning the focus ring results in a plastic-on-plastic feeling that is far from what I consider to be “smooth”.

With that being said, I'd anticipate the build quality to last quite a while as long as it is properly taken care of without being dropped or put in harm's way.

Canon EF 100mm USM's most notable feature is of course its macro functionality which allows you to take stunning close-up photos of subjects with a true 1:1 reproduction ratio which is not possible on non-macro lenses. The minimum focusing distance is 12″ from subject and when you take the fixed 100mm focal length into consideration this can make for some seriously close-up shots.

Another advantage to this lens is the wide-open aperture of f/2.8. With this feature, you're able to capture stellar depth of field and this also aids heavily in regards to low-light performance. The ultrasonic autofocus motor makes for quiet AF performance, something most notable for video-use as that is where AF noise tends to put a hinder on audio capturing.

One of the most popular questions that arises when deciding whether to buy this lens is how it differs from its higher-priced L series sibling. Surprisingly, the two don't differ all that much yet the added features of the L series may be a necessity for some photographers.

The first main difference has to do with the finer build-quality and weather-sealing that the 100mm f/2.8L Macro utilizes. Unlike the standard 100mm f/2.8 Macro, the L series model is rugged and weatherproof thus being able to handle the elements and shoot in wet or rough conditions without harming the lens. Since I planned to utilize mine mainly for indoor product shots, this advantage wasn't all that important to me.

The second noticeable difference is the L series offers a built-in image stabilization feature which is completely absent from the standard 100mm f/2.8 macro. This feature makes handheld shooting MUCH easier and is likely worth the price difference if you're planning on utilizing this lens mainly for handheld shots. Once again, my primary purpose for the macro was shooting stationary subjects (mainly products) indoors on a tripod so a lack of IS was not a deal breaker although it would surely be useful.

In the end, it comes down to whether the added durability and extra features are worth the $450 price difference. If you're just planning on shooting product-style shots using a tripod like I am then the answer is likely no. However, if you plan on taking a macro lens out in the field without the use of a tripod then you may want to reconsider the L series.

I've been using the 100mm f/2.8 Macro on a regular basis for the past 5 months or so, primarily for shooting macro situations although I've dabbled with some portrait work as well. The lens performs extremely well thanks to the high-quality glass which produces crisp macro and portrait images.

The autofocus mechanism is rather quick in most scenarios although it does have a tendency to get confused once in a while when trying to dial in on certain subjects.. When this happens, the autofocus will just stutter in an unfocused (blurry) until you choose a different subject that it is able to refocus on. As I stated earlier, the focus ring adjustment has a far from perfect feel to it although it works just fine and offers a long throw for superb accuracy when focusing on both near or far subjects.

The lack of image stabilization is the most notable loss in performance when shooting handheld. In one recent case in particular, I was shooting a spider whom was on his web from about 2 feet away while kneeling in an awkward position. After taking around 10-15 shots, I was disappointed to find out that I was unable to get a single crisp shot of the spider. Some of the shots dipped to focus on the web more than the spider due to the narrow depth of field at f/2.8 and the shots that did grab the spider in focus ended up blurry due to the lack of a steady shot.

If you're looking to utilize this lens for handheld macro use, your camera skills will be the deciding factor for how your shots look in the final outcome. Since I mainly deal with shooting on a tripod, I was unable to achieve the shot I wanted in that scenario although I'd bet some of you more experienced shooters would have been able to pull it off without hesitation.

The USM functionality works extremely well and is ideal for someone who wants to utilize this lens for video use. When coupled with my 70D, it executes silent continuous autofocus regardless of my subject moving about the frame. Frankly, I'd expect USM functionality at a $600 price-point and its performance does not disappoint.

This lens' f/2.8 capabilities allows for awesome depth of field at both close and far range. However, using f/2.8 at true “macro” range can be very tricky as the auto-focusing is very sensitive. You can easily miss your intended subject or only capture a portion when shooting wide open and it takes skill to successfully accomplish this with a moving subject (ex. moving bugs, flowers blowing in wind, etc.)

Throughout my use with the Canon EF 100mm f/2.8 macro, I've experience little noticeable distortion or vignetting regardless of camera body used. When there is slight barrel distortion or vignetting present, it was most noticeable on my full-frame and even so, it was fixed quickly by Lightroom 5's built-in lens' correction feature. Overall, I was very impressed with the 100mm Macro in these categories and believe it will match or out perform most competing lenses at this general price-point.

While most of you realize the different between a full-frame and crop-sensor, I'm going to just give a basic example of the field of view shown between the differing sensors in an identical scenario. Hopefully, this will give some of you experienced photographers a better idea of how this lens will line up though your camera's viewfinder. Keep in mind, the only different elements between these two shots is the camera bodies and the camera location (same tripod in a stationary position) and settings were identical. 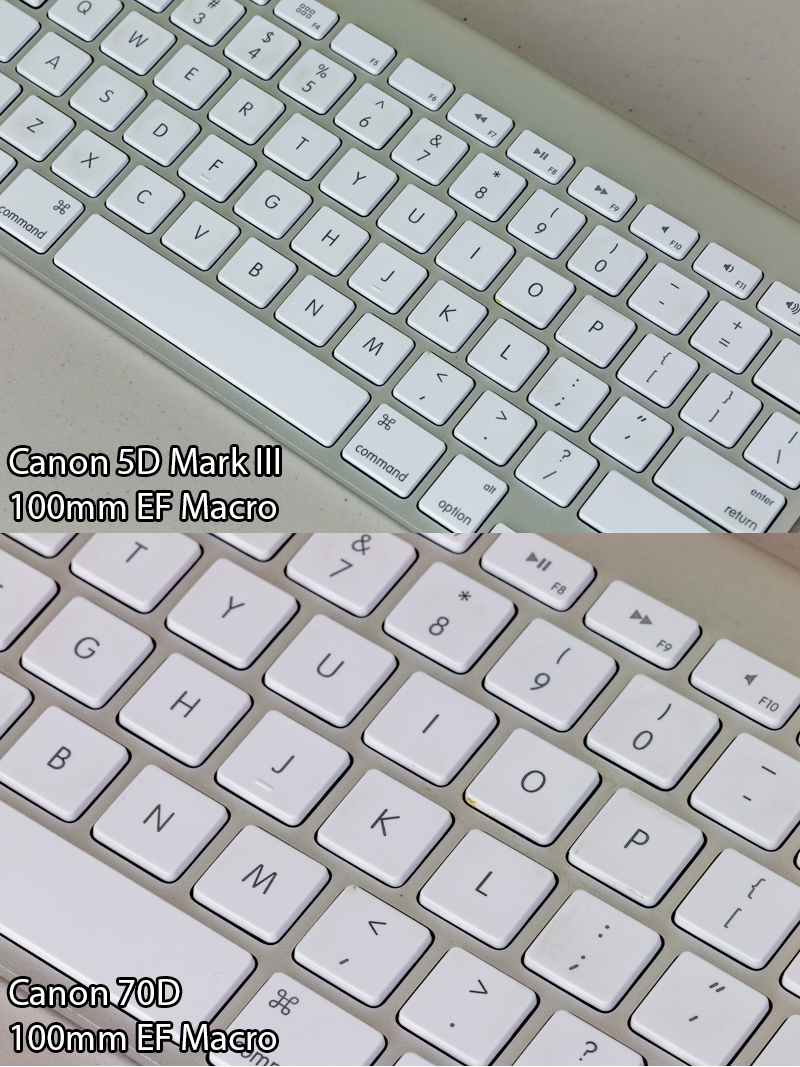 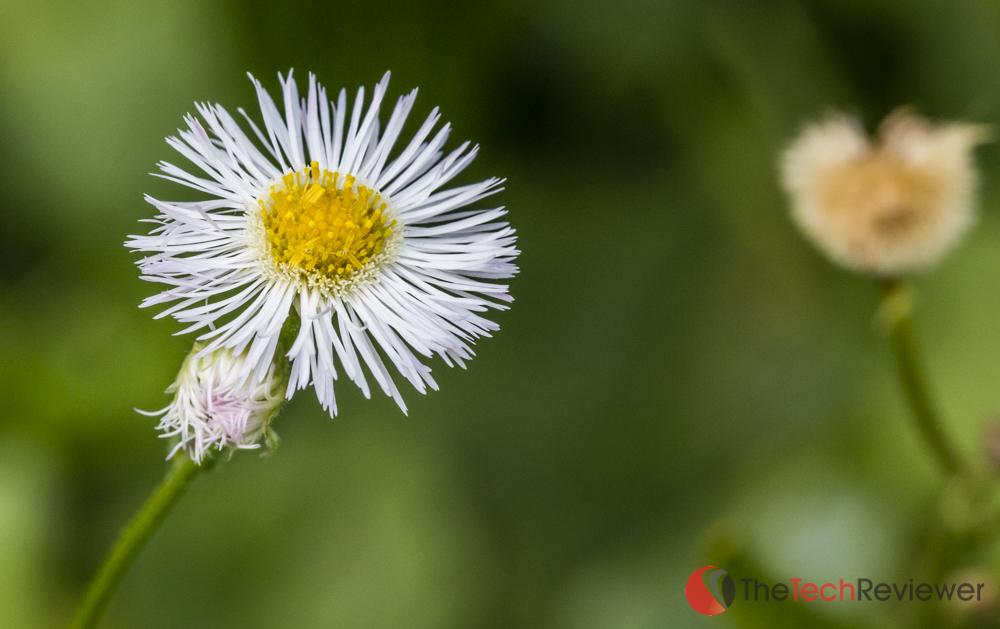 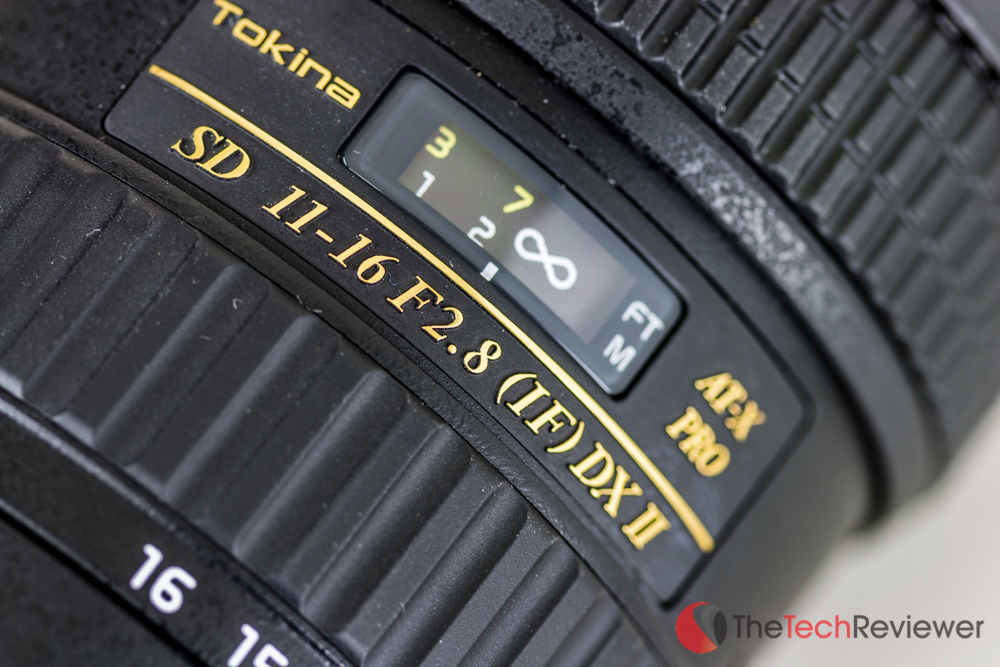 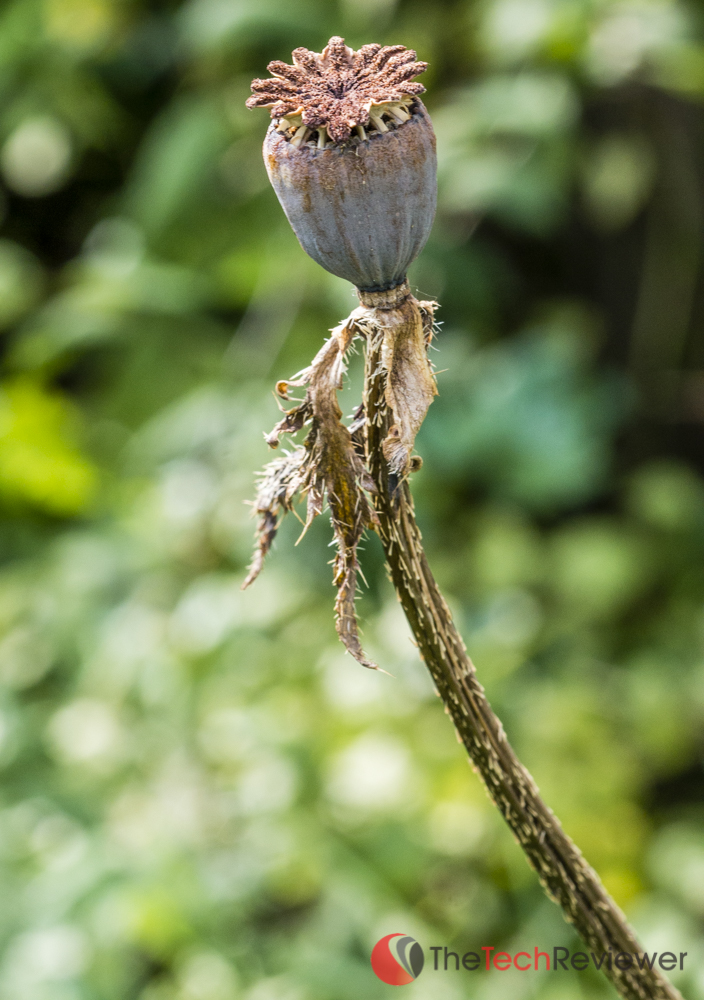 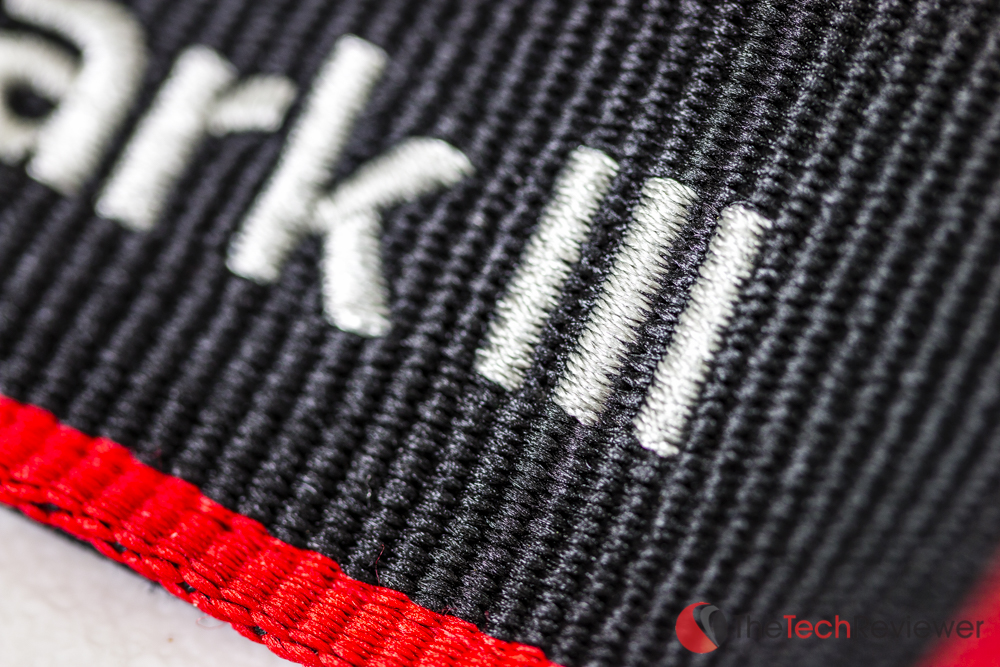 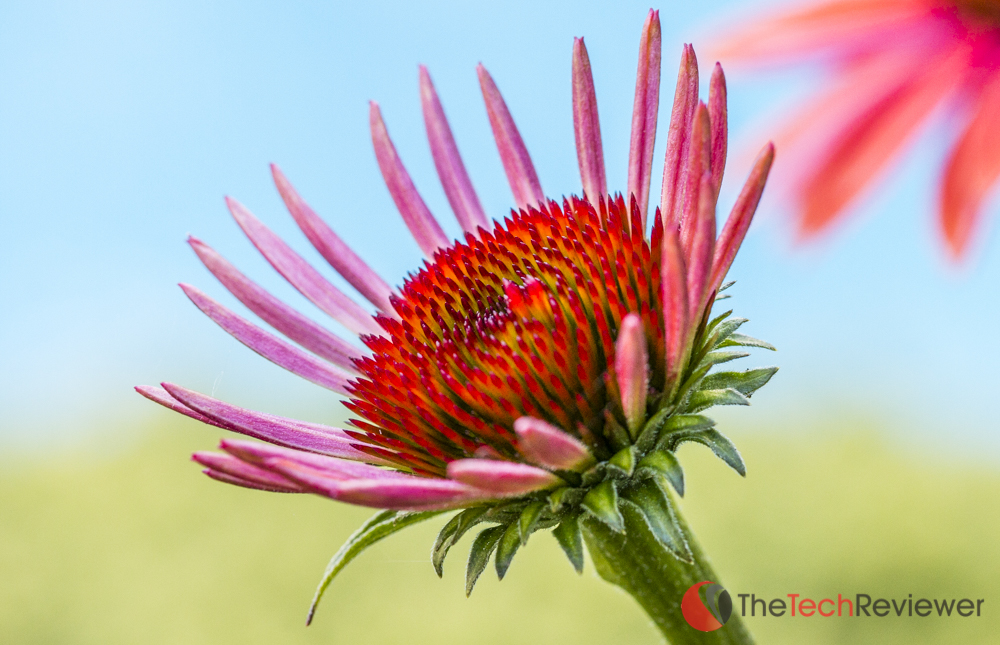 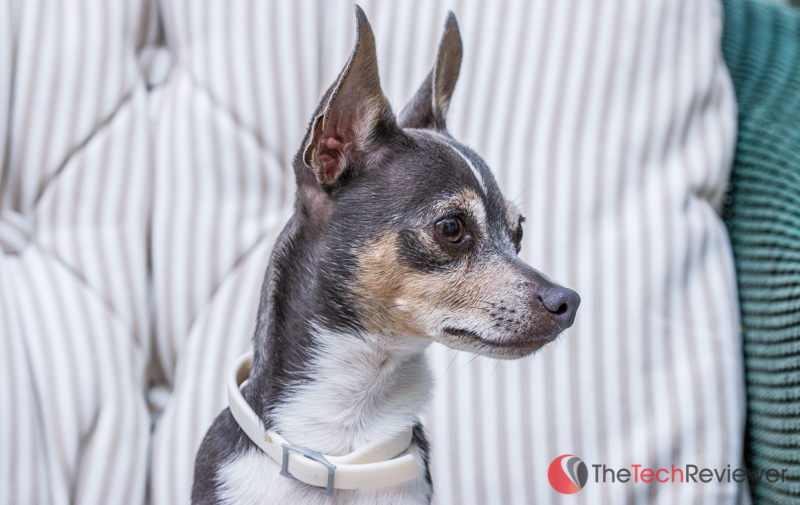 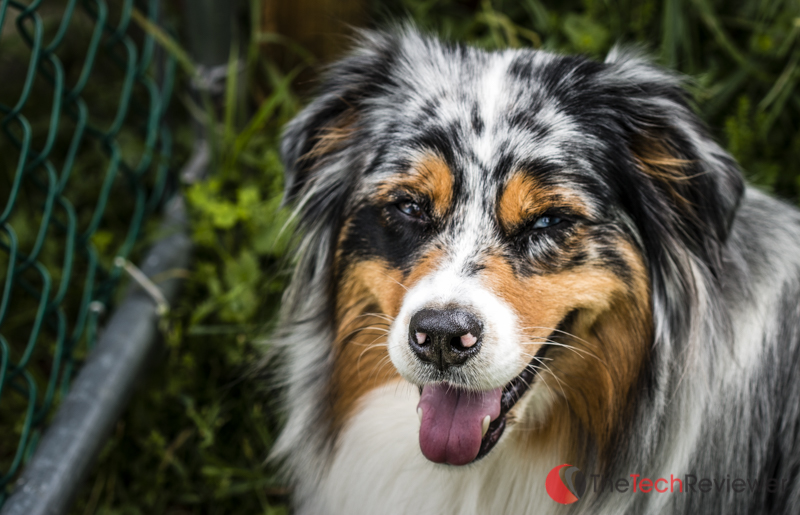 Overall, I am pleased with my purchase of the Canon EF 100mm f/2.8 Macro USM Lens. It is able to handle my macro photography needs and also doubles as a nice portrait lens. While the lack of weather-sealing and image stabilization is a noticeable downfall when compared to its L series sibling, these features didn't warrant the $450 price difference in my situation since I'm primarily shooting indoors with a tripod. If you're considering buying a Canon lens for macro use and don't want to spend the extra money on the EF 100mm f/2.8L Macro then this will likely be your next best option.